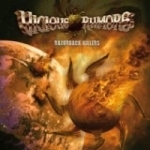 I must say VICIOUS RUMORS’s previous album, "Warball" had been a great surprise for me considering how weak the VICIOUS RUMORS albums had been once the great late Carl Albert passed away. Influenced by ‘modern’ Metal, the Bay Area bunch had considerably distanced from their original approach with this pathetic modern stuff but "Warball" with Mr Rivera on vocals had gotten me back on board so even with a new vocalist for the job, Brian Allen, I had great expectations of course with this new record, expecting another over the edge type of record with a bunch of up-tempo tunes mixed with medium paced ones, in other words, a classic VICIOUS RUMORS album. Well while being far from a bad record, I still remain hungry after hearing it over and over because once the first two songs are over, the eight remaining ones rarely get the ball going again like one could expect from a Power Metal band which is what VICIOUS RUMORS were to start with (please let the Thrash or Speed tag outside of the game boys because VICIOUS RUMORS never were that type of band). ‘Murderball’ and ‘Razorback Killers’ are both two high energized songs, especially the title track, classic killer VICIOUS RUMORS stuff with all the elements that makes this act what it is. But when the third tune comes in, ‘Black’, well the tempo really slows down, not that I have something against slow tempos, but the overall vibe plus the awful chorus just bores me. ‘Bloodstained Destiny’ offers some more energy but it’s not so convincing as the riffing simply doesn’t really cut. Also Allen’s somewhat angry tone at times just doesn’t do it for me, we need a real singer not some shouter or whatever. ‘All I Want Is You’ is a sad surprise considering how awful the chorus is, pure cheesy stuff and not something you would expect from Mr. Thorpe. Oh yeah, I have no worries and expect some crowds to be totally happy and into this type of silly stuff. Fortunately ‘Axe To Grind’ is the third scorcher, good but in my opinion Brian’s voice is not melodic enough to fit in totally. ‘Let The Garden Burn’ carries some classic VICIOUS RUMORS elements but the chorus is so predictable that it doesn’t work for me, they’ve tried to make a hymn with this but was it necessary? I doubt it… ‘Right Of Devastation’ sees VICIOUS RUMORS going back to more serious things, still the riffs don’t sound that effective to me, okay stuff but nothing ripping. ‘Deal With The Devil’ while not being flashy, speedy or whatever possess those subtleties one can expect from the VICIOUS RUMORS material, nice ending. So at the end of the day I’m not convinced by Brian’s performance, he’s not a bad singer by any means but I find his vocal range to be too much ‘angry’ like plus there’s a lack of devastating riffs (no worries, the lead work is still way ahead from tons of other bands). But I’m gonna be in the minority so… enjoy it for now! www.viciousrumors.com, www.myspace.com/viciousrumors