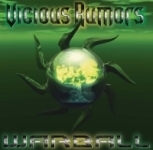 Now this is what I call a comeback… it took several years and albums for this legendary Bay Area Power Metal act to achieve it but finally they’re back on the right way with this new release! Why it took mainman / guitarist Geoff Thorpe so long to realize that VICIOUS RUMORS weren’t about downtuning, angry tones and such bullshit / fake elements will remain a mystery forever – well money could be part of the answer… but no matter what, the mighty VICIOUS RUMORS are back healthy! This return to form also marks the return of Dave Starr on bass, Larry Howe on drums plus the addition of the one and only James Rivera on vocals… while I was really sceptical lately about all the stuff Rivera was doing everywhere (DISTANT THUNDER, HELSTAR, SEVEN WITCHES…), this time I acknowledge the fact that his addition is definitively a key point for VICIOUS RUMORS… after all delivering great music is one thing but finding a singer that could rivalize with Carl Albert is another thing but the man does a faultless job here and adding that final – but crucial – element definitively put VICIOUS RUMORS back on the rails. You get it all on this album, moderately fast and furious tunes like ‘Sonic Rebellion’ with that unique drumming style courtesy of Howe or ‘Wheels Of Madness’. Mid paced and real catchy numbers like ‘Mr Miracle’ (a tune very reminiscent of the once killer DESTINY’S END surprisingly!), ‘Cross Threads’ (totally killer melodic yet powerful tune!), ‘Ghost Within’ (check out this ripping galloping tempo with a shredding lead as start)… You fuckin’ get it all here, every song is distinctive from each other in the tradition of VICIOUS RUMORS, the singing just fuckin’ kicks ass, the leads are as blazing as in the past (second guitar parts are done by Brad Gillis – still wonder why he has joined this band considering his musical past – and the mighty Thaen Rasmussen of ANVIL CHORUS fame), the rhythm section is powerful as hell… KILLER! The low point here are two songs that had no place on such a record, ‘Windows Of Memory’ (a ballad that goes nowhere) and ‘Oceans Of Rage’ (a song with a somewhat ‘modern’ feel that is truly useless) but in all honesty its minor criticism comparing to what VICIOUS RUMORS have to offer throughout the course of this album. As far as I’m concerned this is truly a record that his place along "Digital Dictator" or "Vicious Rumors"- it’s that fuckin’ good! Welcome to the ball!