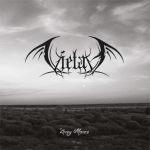 This is the debut of a one-man band from Belarus playing atmospheric Black Metal called Vietah (“waning moon”). "Zorny Maroz" (apparently meaning "star frost") offers very ambient-driven music, quite simplistic and raw. It heavily relies on backing keyboards to set the mood. And the mood is, you get it, depressive, cold and grim. In fact, and this is hard to overstate, the riffs, Antarctis’ singing (in Belarusian), everything here really, is truly deeply evocative of early BURZUM. Hear those screams somewhere around the middle of ‘Tliennie’, for instance… well, just hear anything, in fact. In this early stage of the band’s career, VIETAH has enough personality, I guess, not to be called a simple imitation, but the influence is paramount. You get very atmospheric, slow, repetitive songs – the reason why an album over 40 minutes long only has five tracks. It’s not slow all the time; once in a while those programmed double bass drums fittingly speed up. Despite its simplicity, Antarctis’ talent must be recognized, and some of this material is rather well-composed, the strongest track in my opinion being ‘U Prastoru Pa-za Inszym Bokam’ (apparently about a mystical journey to the stars… BURZUM, anyone?). There are also two instrumentals that can be rather tedious unless you’re in the mood for such a thing. Which I guess you will be if you’re into this kind of music. If you like Grishnackh’s early work… have a go at this. Find out more at www.facebook.com/vietah.official, https://vietah.bandcamp.com, www.ihate.se 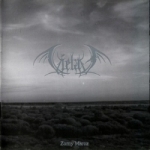 VIETAH – “… the old moon of Belarus” is another band which is confirming the fact that the East European scene is getting stronger and stronger. With “Zorny Maroz” the band is presenting their tribute to the dark night sky and the five songs are an atmospheric bastard of their Ukrainian brothers NOKTURNAL MORTUM (but not as aggressive and much more important without the political rubbish) plus an essential portion of the former ARCTURUS cosmos. Antarctis is the only driving force behind this band and he is – even if we are talking about his debut – in the position to create a dark atmosphere which is leading through the whole album. Especially the three long main songs getting further atmosphere through the vocals in his mother tongue but also the two dark instrumentals are fully integrated in the lyrical and musical concept. The Belarus lyrics had been fully translated and the grey layout (by Mr. Vinterriket) is more than suitable for this release. A great release by this young band and for sure is VIETAH’s debut a more than suitable album for the coming winter. www.stygiancrypt.com