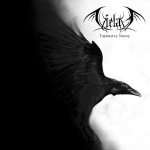 When it comes to the so-called Viking or Pagan Metal genre, I am very often not really enthusiastic. Musically it is more often pretty mediocre, the lyrics are all about war, honor, pride, fighting, traveling by ship, traveling by horse and suchlike. And from time to time a women appears on the cover and… damn, do they have silicone breast implants in Valhalla? VIETAH from Belarus published their debut and the follow-up via Stygian Crypt Records and therefore I was a little bit skeptical about the band’s third release, “Tajemstvy Noczy”. But amazingly the band, respectively the one man band, delivers a fine piece of atmospheric Black Metal. The lyrics are more into the personal direction, “[…] gloomy thoughts, melancholic self-immersion”, to quote the the record-label. Musically the album is completely stripped of any unnecessary stuff like spoken words, endless floating keyboard passages, female vocals and similar elements, which are often used by the above mentioned Pagan / Viking Metal bands. Fours songs with a playing time of overall 40 minutes may give you a hint of what to expect. A continuous flow of music, consistently mid-tempo paced. The vocals are more growls than shrieks, and the guitar-riffs are really amazing. They make you feel exactly like Antarctis, the man behind VIETAH, must have felt when he composes his music. The sound is pretty fine, clear and forcefully. Once the slogan “True Norwegian Black Metal” was a seal of quality. Nowadays VIETAH have established “True Belarus Black Metal” as a new sign for quality. More information at: www.vietah.com, www.facebook.com/vietah.official, www.possession.ru

Here we have another re-released album from the works of Belarusian one man band VIETAH. “Tajemstvy Noczy” (“Sacraments Of Night “) is the third opus of the band, originally released in 2014 on CD only. This time, it gets available on vinyl for the first time, as well as the other three albums of VIETAH. Of course, “Tajemstvy Noczy” is also limited to 500 copies on, in this case, white vinyl. Since my review on the pretty fine predecessor “Smalisty ´ah” featured all necessary information on VIETAH, I spare the details here and go on directly to the music Antarctis delivered here. And today, this is not the part of writing reviews I like most. Why that? Well, in comparison to “Smalisty ´ah”, the sound of VIETAH evolved into a direction that makes the band easily disappear in a bunch of similar and mainly uninspired sounding bands. The four long songs on “Tajemstvy Noczy”, all of them around ten minutes long, are much more that typical epic to atmospheric Black Metal. The pretty unique old school based guitar riffs and forays into raw and cold Black Metal are gone in favour of mid tempo songs and missing diversification of speed. Usually, this ain’t too bad, in most cases stuff like this is boring and uninteresting to me. But in this special case, it’s a little annoying since VIETAH were able to do better. If I don’t take that into concern, songs like ‘Miesjac U Volnym Syhodzie’ (‘Moon In Free Leaving’) or ‘Kalyhanka Dlja Njabo¸czyka’ (‘Lullaby For Dead Man’) are not that bad, genre typical with a slight hint on what VIETAH did before, but not my cup of tea for sure, since nearly any Black Metal of that kind isn’t. Maybe connoisseurs of the genre will dig this album, they’re advised to visit www.facebook.com/vietah.official or https://vietah.bandcamp.com. And it will not be a fault to visit: www.ihate.se