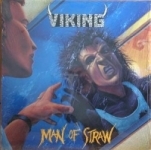 Don’t let yourself be fooled by this band’s name – its music has as little to do with so called Viking Metal as the latter has to do with real vikings and Metal they prefered. What this Californian VIKING used to deliver back in late 80s was fast and furious, first-class Thrash full of aggression and raw energy. The interview with frontman Ron Eriksen published elsewhere on this site may shed some light on the band’s rise and fall, although I’d like to prevent you from making a big fuss over Ron’s turning into new-born Christian right in the middle of working on this album. It’s just his personal belief in the end and I really doubt it could change the initial musical direction of “Man Of Straw” too much (unlike the lyrical contents which, for obvious reasons, were changed completely). If “Do Or Die”, their first LP, was a kind of fierce and drunken viking horde’s attack – no mercy, no surrender, the second one used much more subtle approach and advanced weapons to reach the same aim. And with the same convincing results, I’d like to add, even though I personally miss here those demons that ruled their first LP, adding a charming touch of chaos to the music. I should confess of not being very fond of too much technically precise, matured, “adult-oriented” approach to Thrash, preferring this style’s raw and primeval origins any day and night, but this album somehow convinces even me. Seems like VIKING not only found that tiny borderline dividing these two sides of Thrash, but even managed to keep balancing on it throughout all the album with the grace and skill of a circus acrobat. It’s rather funny how their multi-layered compositions from time to time make the listener to believe there are twice more songs on this album, as sudden changes of rhythms and moods is a weapon which the band doesn’t hesitate to use now and then. Sure, it demands attention and willing to dig deep in its quite complex contents, but nobody said that Metal, especially its Thrash branch, should be easy-listening kind of relaxing music. Fortunately, the complexity in VIKING’s vocabulary means a cobweb of many cool melodies and interesting riffs, not the plain boredom of techno / progressive / whatever kind of Metal. Everything is right in place on this record. There isn’t any speed for the sake of speed or heaviness just for the sake of it mentality to be found on “Man of Straw” – whatever VIKING do, they do it for a reason. I wonder if the cover-version of ‘Hell Is For Children’ (originally by PAT BENATAR – Frank) was included here because of it’s being musically or rather lyrically fitting the album? Anyway, it sits here quite comfortably, despite being (at least for the largest part of it) not quite as intense as the rest of the tracks on offer. It’s really well-placed break in the album’s tempo which makes you hum its chorus for hours and days. Another powerful weapon in VIKING’s arsenal is Ron Eriksen’s charismatic vocals which has nothing to do with show-off professionalism or anything forced and artificial. Ron is just “singing” here, not “doing vocals”, if you can see (or hear) the difference. The same may be said about the other musicians as well – they literally “play” in a relaxed and easy manner instead of trying to “perform” their instruments the best they can. But by no means I’m trying to say they do it half-heartedly, don’t get me wrong. In their own words from “Do Or Die” song and LP: “If it ain’t worth dying for it ain’t worth doing”, period. A pity VIKING’s legacy is so humble in quantity, but it’s still outstanding when it comes to its quality. Besides great music, “Man Of Straw” has really a nice cover which demands vinyl sleeve’s format – I’m afraid the dwarf’s size of modern digital media doesn’t do much justice to John Zeleznik’s drawing. On the other hand, even absolutely happy with their old VIKING records vinyl maniacs may find this reissue worth getting, as it contains four bonus tracks – two demo songs from 1986, one live track and one from never finished third album. Now let’s start the campaign to persuade the label to press those bonus tracks on 7 inch or on beautiful picture disc, so every VIKING fan from past and present would be happy. The door to knock is: www.lostandfoundrecords.com