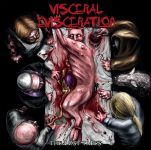 Austria my dear! From the dark past of one of this contemptible planet’s most artistically distinguished countries comes an old band whose delicate moniker should be no stranger to any 90s subterranean Death Metal devotee. The band formed within Vienna’s charming coils in 1991 and only released one demo and a full-length album (“Incessant Desire For Palatable Flesh”, Napalm Records, 1994) before changing name into AS I LAY DYING. Yes, just like that wimpy US Metalcore band we should all despise. This new Vic Records reprint has the aforementioned 1993 demo, entitled “Savour Of the Seething Meat!”, the only promo released under their second name plus 4 pretty rough bonus rehearsal tunes, last of which is an instrumental sketch of a seemingly unfinished song. VISCERAL EVISCERATION’s most peculiar aspect is the considerable divergence between their sound and their lyrics and aesthetics. Although the influence of the so-called Peaceville Three on the band’s sound is absolutely undeniable, the barbarity in their cover arts and verses sets VISCERAL EVISCERATION on the same gore-soaked path of fellow countrymen PUNGENT STENCH or DISASTROUS MURMUR, to say the least. It’s something like “Gothic” era PARADISE LOST touching on subjects such as Epicurean gynaecologists, live surgery on humans or even ‘Chewing Female Genital Parts’ instead of singing songs about sorrow, melancholy and the anguish of loss, so to speak. Classic TROUBLE meets slow IRON MAIDEN twin guitar riffs tangling with deep growls and even some scattered Andrew Eldritch juvenile imitations is what you’ll find into this weird ceremony of opposites. There was some genius in this operation and a further, more accomplished development of their style might have proved interesting in hindsight. A pretty interesting release for all those who love digging through piles of mud in search for all those puzzling oddities only the 90s could give. Make sure you head out to www.facebook.com/visceralevisceration and www.vicrecords.com to order your own bloody Christmas copy.