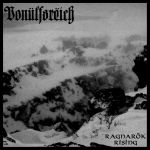 Formed in 2012, Finnish Back Metal band VONÜLFSRËICH have released one full length back in 2017, three demo tapes and eight EPs. To me, that is a pretty decent career so far. They used to be a trio, but since the passing of Lempo (bass and vocals) in 2015, they have remained a duo with Fogg and Yonulf alternating instruments and vocals. And they have just released their sophomore album “Ragnarök Rising” via Fallen Temple Records. Upon first sight I thought I was in for some regular atmospheric / ambient music that has had some (weird?) revival for the last 5-6 years. Wrong! VONÜLFSRËICH plays early 90s cold, fast and aggressive Black Metal. “Ragnarok Rising” was a compelling first listen. The album managed to keep me interested despite the duration of the songs (10 minutes on average except for the opener / intro). The combination of d-beats, slow doom-ish segments, blast beats and “march” like patterns, along tremolo, Thrash and open guitar riffs just kept me wanting to hear more. The songs keep shifting, introducing constant variations, but in a very logical way, so to speak. The composition doesn’t seem forced at all. And the vocals seem to settle in perfectly as the parts evolve. Having so many elements adjusted so seamlessly is something I must highlight. For me, during the evolution of this subgenre, just a few bands have kept this style going without repeating all the clichés. Now I can add VONÜLFSRËICH to that list. Production wise, there is one word that just fits: cold. The drums lack punchy-ness, the guitars are razor-sharp with a trebly edge, the distorted bass is present, but not felt and the high pitched vocals dominate, although these guys also mix in clear vocals and some low grunts depending on the mood swings. And everything sounds great! The mix is clear despite the almost-raw sound of the instruments. And I really appreciate the fact that the mastering process has lots of dynamics. Although “Ragnarok Rising” may sound too familiar to some, VONÜLFSRËICH’s conviction and commitment to this style of extreme music is amazing and acknowledged. Fully recommended to Black and extreme Metal listeners alike. Contact the band at www.facebook.com/vonülfsrëich-764485383640064 and their label at www.facebook.com/fallentemple666