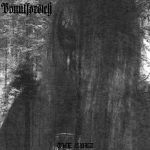 This band conformed by two demons was formed back in 2012 in Finland, and already has quite a number of releases with many EPs and one full length out. This is one of the latest material they have released in a form of another EP, containing unreleased material that is both new and old. There is some certain charm with this kind of music as although it is labeled as Black Metal, the five songs contained here (cover included) show a band that has many faces. They start with a fast Black Metal song not far from a punkish BATHORY sound, with a rehearsal like quality, but most likely a studio one take piece. Then the band goes on with ‘Kirveeni’, which is a total AUTOPSY worship, and then they get more into a very IMPALED NAZARENE kind of song, then they doom it out not that far away from their land mates of UNHOLY to finally kill it with a great cover of their also land mates of WIZZARD, which is a blackend Heavy / Speed Metal band and they cover it respecting the style just with the more rawer vocals. This has a total demo essence, and even though the production values are raw, it still sounds good. This is the type of band that although might carry one stale label as a tag, they don’t give a rat ass to do whatever they want in the style they want. And for that, they get points in my book. A new album is coming, these songs were enough to make me get more of their music, and there is a new song from that album in there, and it does sound with a much better production, yet retains all the elements and influences in there. Imagine if Chris Reifert and the boys went Black Metal, it will not be far away from this. www.facebook.com/vonülfsrëich-764485383640064, www.facebook.com/fallentemple666

Julián “The Ghost (Trapped In The Freezing Forest)” Núñez

Julián "The Ghost (Trapped In The Freezing Forest)" Núñez