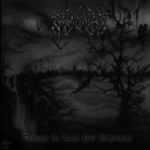 Raw and furious Black Metal from Perth, Australia. That’s what this fivesome called WARDAEMONIC offers us on their pitch-black plate, titled "Through The Dank Pale Gravelands". It always feels good when you come across with a new Black Metal band that has something in their sound that catches your interest from the very first steps – and then not letting you go, but kind of mesmerizing you by whatever ingredients it may have. WARDAEMONIC’s debut album is such one. I can’t explain precisely why I felt so – may I say, ‘welcomed’ to this release, but obviously it had something really special in it that I felt like being home right away. It’s probably because "Through The Dank Pale Gravelands" brought a pile of some other classic Black Metal releases to my mind for some odd reason, like MAYHEM’s "De Mysteriis Dom Satanas", some of those early IMMORTAL and BURZUM albums and a few others whose names are espacing from my lips right now. The band uses a lot of blastbeats in their songs, but I don’t find it any disturbing thing since they can easily also switch off their blastbeat mode to calmer and more, frostbitten moody waters, and let their wickedness get spred that way – still sounding irresistible grim, vicious and ghoulish. WARDAEMONIC’s sound is actually dominated by this certain type of sound that is kinda typical for many Black Metal acts coming from the Scandinavian countries. I mean, overall it sounds very cold and grim the way Black Metal should sound like, reaching a certain type of perfection as far as Black Metal arts are concerned. The occasional keyboard parts also add its own special, dark-ish vibe into this largely snow-melting wholeness, and I gotta admit I really love the bass’ sound in their songs as it”s really present there all the time, clearly sticking out from the other instruments. If my favorite track should be mentioned, then I would probably go with almost a 10-minute epic track ‘Dead Winter’s Serenade’ as in that particular song WARDAEMONIC bring up both ends of their sound – from their chaotic parts to slower parts, loaded with more atmosphere. As my last confession I should add that WARDAEMONIC were indeed a very positive acquaintance to me from down under. Check the out at: www.aussiebastard.com