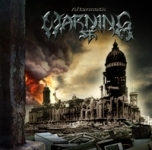 You can blame it on good ol’ Laurent from Snakepit Magazine that I finally checked these guys out as he was praising this album like crazy in the magazine’s latest issue (#11). He even put “Aftermath” in the same (major) league as alltime Metal classics such as ANVIL’s “Forged In Fire”, JAG PANZER’s “Ample Destruction”, METAL CHURCH’s “Metal Church”, ANTHRAX’s “Fistful Of Metal” and METALLICA’s “Kill ‘Em All”! Well, knowing about the influential status of all those releases I personally wouldn’t necessarily agree with a statement like that, but gotta admit though that the album’s material still sounds really fresh, even today. To really understand that, you probably need to know that seven out of the ten featured tracks on offer here are re-recorded versions of old material, originally written and performed by WARNING and THUNDERHEAD in the early 80s, while the remaining three tunes are original demo versions from 1985. The band’s origin already dates back to 1982, when they started out in the Bay Area as WARNING, making themselves a good name in the underground for quite a while until they disappeared again, without ever having recorded an album. In 2000 mainman Jon Torres (who’s also been involved in THUNDERHEAD, ULYSSES SIREN, ANGEL WITCH, REPULSA, I4NI and LÄÄZ ROCKIT) finally decided to reform the band as WARNING SF (in order not to be mistaken with other acts of the same name), but with a slightly changed line-up, that besides him nowadays only consists of one other original member: Brian Pool (who switched from guitar / keyboards to bass & keyboards). Aaron Jellum on guitar (LÄÄZ ROCKIT), Torre Carstensen on vocals (formerly of MY VICTIM) and drummer Will Carroll complete the picture and the result is a great Metal album, full of Bay Area type melodic Thrash, with incredible guitar harmonies and a (newer) Hetfield like vocal delivery. It often kinda reminds me on a mixture of the strongest moments of classic HEATHEN meets ANGEL WITCH meets METALLICA without ANY crappy Nu Metal elements! This is pure Metal insanity from start to finish, done by a bunch of people who really know what this music demands and what it’s all about! A strong production and great artwork complete the overall positive picture. Not really an alltime classic, but certainly a really fine example of how great the bands out of the Bay Area scene used to be (and still are)!