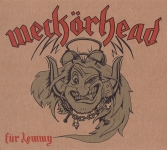 For this review, I have to say two or three things in advance. First of all: I fuckin’ love MOTÖRHEAD!!! And I sometimes like to watch a show of a good tribute band, especially if they pay their tribute to a legendary band that doesn’t exist any longer and won’t be resurrected anyway since the main members are not with us anymore. Yet I don’t really need any records by tribute bands and in addition, I got pretty bored with all these tribute albums of the last more than twenty years. Thus it is no wonder I wasn’t too excited with the idea of a CD EP full of MOTÖRHEAD cover tunes sung in German. But WECKÖRHEAD proved doubting me absolutely wrong with the EP “Für Lemmy”. From the first notes, the four piece from the Osnabrück area provides a performance that both rocks as hell and makes me grin with a kind of devilish joy. The main reason for that grin is because I’m German and understand the lyrics. Sometimes exactly, but at least substantially translated, Wecker (the main man and namesaker of the band) sings the words Lemmy wrote years ago in German. In combination with the dedication of the band, I’m pretty sure that Lemmy, wherever he might listen, would grin as satisfied as me. The songs are beyond any doubt anyway… I mean, what best of compilation of MOTÖRHEAD would be complete without the original versions of ‘D-Das Pik As’ (‘Ace Of Spades’), ‘Nach Rio’ (my all-time fave ‘Going To Brazil’), ‘Röck’n’Röll’ and ‘Am Tod Krepiert’ (‘Killed By Death’, another song I won’t live without)? So, if you love the music of Lemmy and like fine tributes, WECKÖRHEAD should be something for you. Check out www.weckoerhead.de or www.facebook.com/weckoerhead, get that EP and don’t forget to ask for a vinyl edition. 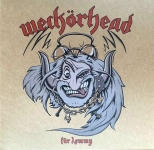 About two years ago, I was introduced to the German band WECKÖRHEAD and their EP “Für Lemmy”. Their tribute to the mighty MOTÖRHEAD was, still is and will always be a joy for silly old me who loves the music of Lemmy for nearly forty years now. The four songs of this EP, classic MOTÖRhits with German lyrics, were just too great to be filed under “another tribute record”. Last years vinyl double album “Taub Für Immer” was a very good one either. As Wecker and his band seem to be real vinyl maniacs, they now released the EP “Für Lemmy” again as an LP. 180 gram vinyl, a heavy gatefold sleeve, handnumbered and a 20-page-booklet. I can see all you record collectors drool like me! Oh, and there’s a sticker of CD size included as well. But the most important thing of this re-release are the six new studio recordings, who are exclusive to this release. So it’s not just ‘D-Das Pik Ass’, ‘… Nach Rio’, ‘Röck’n’Röll’ and ‘Am Tod Krepiert’ here, who still are as great as two years ago, well maybe even better. On the a-side, we also have ‘Friss Die Reichen’ (‘Eat The Rich’), that was on “Taub Für Immer” in a live version, in a proper and powerful studio recording. The b-side features a lot of surprises. Who expected ‘Ich Bin Der Doktor’ (‘I’m The Doctor’) here? Not me, but I appreciate the great version all the way. ‘Jailbait’ became ‘Frühreif’, and for us Germans it’s a proof that some of the lyrics Lemmy wrote in his earlier years were questionable. But the song itself still is a MOTÖRHEAD classic and the version from WECKÖRHEAD is either fine. My personal favourite of the new songs is, as expected, ‘Scheinen’ (‘Shine’), the original being one of my all-time hits. Another unexpected song is ‘Nur Weil Ihr Die Macht Habt, Habt Ihr Noch Lange Nicht Das Recht’ (‘Just Cos You Got The Power’). This more than seven minutes long song was originally the b-side of a single (“Eat The Rich”), but one of the most underrated songs MOTÖRHEAD wrote. And WECKÖRHEAD did Lemmy’s accusation of capitalism great justice. Damn great! In the end, we have an intersting surprise: ‘Brich Das Gesetz’ (‘Breaking The Law’) is the original classic from JUDAS PRIEST, once covered by MOTÖRHEAD and now Weckörized. Somehow this German version reminds me of how I sung this song in days of yore when I was drunk… Anyway, all you MOTÖRHEADbangers here will surely like WECKÖRHEAD as much as I do, so visit them at www.facebook.com/weckoerhead or www.weckoerhead.de. In case you don’t want to hesitate: the album is available for 20€ (black vinyl, plus P&P) or 23€ (coloured vinyl, plus P&P), to be ordered at wecker@weckoerhead.de.