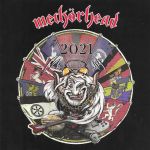 They did it again! WECKÖRHEAD, the ultimate German tribute band to the mighty MOTÖRHEAD used the enforced pandemic break from their live activities to record a new album. Just like their first full album “Taub Für Immer” in 2019, this new album is housed in a sleeve with fantastic artwork that is a tribute to the great art Joe Petagno did for classic MOTÖRalbums. This time it is more than based on “1916”, as the album it graces is called “2021”. And on this record WECKÖRHEAD give us all we can expect after their first two releases (and their split 7”). Classic Lemmy compositions with German lyrics, from literally translated over fantastically adapted to loosely interpreted. Of course their interpretations musically stick very close to the original versions, played by a well attuned band and fantastically laid down on tape by Jörg Uken, who also plays the drums for the band one last time. Those who already know and like WECKÖRHEAD will surely be pleased again, those who don’t know yet won’t be disappointed if they are into the originals. And the choice of songs is as fine as possible, as WECKÖRHEAD included some all time MOTÖRclassics they haven’t done before like ‘Wir Sind Weckörhead’ (‘We Are Motörhead’), ‘Der Hammer’ (‘The Hammer’) or ‘Lieb Mich Wie Ein Reptil’ (‘Love Me Like A Reptile’). Yours truly is especially pleased with ‘Der Stier’, Weckers interpretation of ‘Capricorn’ with lyrics dedicated to his zodiac sign Taurus (“Stier” in German). As well we find more oldies like ‘Westernfilme’ (‘Shoot You In The Back’) and newer MOTÖRhits like ‘Bin So’n Arsch’ (‘I’m So Bad Baby, I Don’t Care’), ‘Den Deibel Kenn Ich’ (‘Devil I Know’) or ‘Hau Besser Ab’ (‘You Better Run’). So it’s nothing new in the house of main man Wecker and his boys? Of course not, because the guys have one or another unexpected ace up their sleeves. The greatest surprise to me was WECKÖRHEAD doing the quiet side of Lemmy with ‘1916’ and ‘Lass Papi Mich Nicht Küssen’ (‘Don’t Let Daddy Kiss Me’) that are far from awkward, as these interpretations really work. Well done! I also didn’t really expect songs that MOTÖRHEAD already covered again, in this case ‘Die Feuerwehr’, which is a Weckörized version of ‘Emergency’ from GIRLSCHOOL and ‘Abriss’. The latter is originally METALLICA’s ‘Whiplash’ and definitely sticks to the real original version, in my humble opinion too much. With ‘Hütte Rockt’ WECKÖRHEAD along with some guests (Kirsten, Heaven, Ralli & Dr. Dr. Dräse) bow to a legendary local festival of that name, musically based on the ancient ‘City Kids’ from the days when Lemmy started it all. As a certain extra (and to exhaust the capacities of the CD), WECKÖRHEAD included five remixed songs from their prior releases with re-recorded vocals by other singers. To those who know the older recordings, especially ‘Frühreif’ (‘Jailbait’) with the vocals of Julia Kruse is pretty interesting, as these lyrics sung by a woman are even more controversial. Also ‘Kein Stil’ (‘No Class’) with Wecker singing is a quite fine alternative to the Wendy O. Williams styled interpretation said Julia did on “Taub Für Immer”. So if you still haven’t checked out WECKÖRHEAD, do it at www.weckoerhead.de or www.facebook.com/weckoerhead. It’s, as I already said over and over, a special joy for any fan of the original.