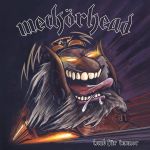 It was early last year that I had the joy to tell you about the first EP from WECKÖRHEAD, a German band that only exists to pay a fine tribute to the gods of all Rock’n’Roll: MOTÖRHEAD! Their “Für Lemmy” EP really made me grin and still does, the idea of playing Lemmy’s songs with at least substantially translated German lyrics worked just too good on this four track release. Now the four piece from Osnabrück is here with a full length album called “Taub Für Immer” (“Deaf Forever”), a double LP with nearly 80 minutes running time. The first question I asked myself: will the concept also work out over a long distance? Yes, it mainly does, since the references are just too good. In addition, main man Wecker and his band are so close to the originals and tight enough to serve nearly all of them damn well. Yet there are some strange moments anyway. ‘Luise, Luise’, originally ‘Louie Louie’, a Rhythm’n’Blues song from the 1950s and the first single-hit from MOTÖRHEAD, is really odd with German lyrics. These were nearly literally translated and sound really silly to a German. And ‘Orgasmatron’ doesn’t have the intensity and sinister angriness of the original (the vocal delivery is also a lot closer to RAMMSTEIN here in my opinion – Frank). Which only proves my thesis that there are songs that can not be covered. Finally there’s ‘Gott Rasiert Die Königin’, which is a motörized German version of ‘God Save The Queen’ from THE SEX PISTOLS, which doesn’t really work here, but it wasn’t the best cover tune MOTÖRHEAD did anyway. The listener is also in for some surprises as well, like ‘Berühr Mich Nicht’, originally ‘Please Don’t Touch’, the song MOTÖRHEAD recorded together with GIRLSCHOOL. Just like in the the old version, the second voice is female (courtesy of Julia Kruse – Frank). And ‘Kein Stil’ (‘No Class’) is also sung by her, which really makes sense here, since the German lyrics are predestined to be sung by a woman. Yet my real favourites on “Taub Für Immer” are some absolute MOTÖRHEAD faves of mine in cool adaptations. Want some examples? Well, of course ‘Eisenfaust’ (‘Iron Fist’) really rocks, and ‘Tanz Auf Deinem Grab’ (‘Dancing On Your Grave’) is just too cool, for I love the original version so much. By the way, “Another Perfect Day” still is totally underrated. ‘Zurück Auf Der Straße’ (‘We Are The Road Crew’), a more substantially translated song, is also damn fine. And last, but definitely not least, there is ‘In Osnabrück’ (‘Metropolis’), whose lyrics are so freely translated that they are nearly a new original and thus became a nice tribute to Wecker’s youth in his home town as well. The EP tunes ‘D-Das Pik As’ (‘Ace Of Spades’) and ‘Am Tod Krepiert’ (‘Killed By Death’) are on the album as well, but, like ‘Friss Die Reichen’ (‘Eat The Rich’) in live versions. Well, all in all, “Taub Für Immer” is a real joy for any MOTÖRHEAD fan, German or not. Us Krauts can grin all the way how plebby some of Lemmys lyrics sound in German. And those who don’t understand our difficult language might get the same exotic feeling I get when I listen to classic songs in a foreign language I don’t understand (which is nearly any…). And all of us can enjoy a bunch of cool and witty tribute songs (it is available as a limited edition gatefold vinyl in three different colors and digipak CD with outstanding packaging and a fantastic "Orgasmatron" tribute cover art – Frank). Visit www.weckoerhead.de or www.facebook.com/weckoerhead