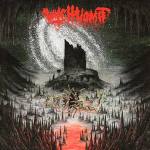 WITCH VOMIT
A Scream From The Tomb Below
(Memento Mori)
30:45min

You would not think that WITCH VOMIT hails from Portland, Oregon (USA). Or at least I was not expecting that at all. They have released a demo-rehearsal tape in 2012, a 7" EP in 2014 and this, "A Scream From The Tomb Below", their 2016 debut album. Their album comes courtesy of premiere Death Metal label Memento Mori from Spain. And what an album this is. The vocals have a clear early INCANTATION influence and musically, some parts did remind me of the slow, swamp like passages of AUTOPSY. But that may be it for the North American influence. As I was saying before, I could’ve swore that WITCH VOMIT came from Scandinavia. And let me clear that up. These guys sound similar to pre – NWOSDM bands (i.e. NIHILIST and CARNAGE). Specially, their infectious riffing and eerie melodic parts. But they are no copycats whatsoever. They have their way of throwing in their own twists and nuances into 8 songs full of raw aggression, mid-paced neck breaking rhythms and obscure growls. Luckily, they don’t overdo blast beats. They are incorporated as part of the many variations throughout the album. So the album keeps a slow to mid pace that makes for a great listening experience. The sound is right on the spot to showcase WITCH VOMIT’s style. The guitar tone is very reminiscent of the "buzz saw" guitar tone from the aforementioned bands, but grittier and with a lot more snap. The bass is thick and present and the drums sound organic and full. The mix follows the dark atmosphere of the album. The vocals are a tad put back, as are the drums. And this helps a lot to the obscure atmosphere surrounding "A Scream From The Tomb Below". Founding members T.T. (guitars and vocals) and V.V. (drums) found in Jason (bass) their perfect partner in crime. I could say that WITCH VOMIT is not bringing anything new to the table and that their originality is not really a stand out issue, but damn, this album is played with such great taste. It sounds convincing and solid. And that is how a Death Metal album should sound, in my humble opinion. I need to follow these guys closely, as I am already wondering if their 2nd album (if and when it happens) will bring us a more evolved version of WITCH VOMIT. This is one of those "Buy or DIE!" albums. So go ahead and show them your support here: www.facebook.com/websofhorror. You can also stream and get their album in digital format here: https://witchvomit1.bandcamp.com/releases. And visit their label’s home page here: www.memento-mori.es