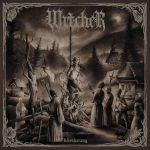 On October 08, 2022, Hungarian label Filosofem Records (owned by Roland Neubauer and Karola Gere) will release in cassette and CD format, the fourth LP of WITCHER, entitled “Lélekharang”. WITCHER is an atmospheric Black Metal duo that was formed in 2010 in Szombathely, Hungary and that has achieved to reproduce a very distinctive sound in this subgenre through the last decade. Having released until now, two demos, three EPs, two splits and three LPs, “Lélekharang” is the last production of WITCHER. This full-length consists of six songs, opening with a Dark Ambient keyboard intro that allows a development of a very well structured and thought album, without any hurry, having similar but unique compositions with an aura that tells a story of a witch that is burned in front of conservative men and women. A soul bell, a sacrifice for the ancient and contemporary double morality. What I found really pleasant, was that the lyrics were sang in Hungarian and entitled with just one word. Not everything must be expressed in English, the native languages feed the soul, Earth and pollution everyday. There are convictions that can’t been expressed in a foreign tongue. ‘Hamvak’ is the second song of “Lélekharang” and one of the weakest. The unvarying riffs and the presence of Karola Gere’s vocals make this one have a boring and romantic sound, tending to have some Gothic twang. After listening to it for the first time, I did not expect the turning point that the other songs will take on me. ‘Lélekharang’ evokes hopelessness and beauty. The keyboards (synths or piano, you name it) have another use, not taking the whole protagonism and just giving an structure for the guitar, dirty vocals and programmed drums to mesmerize the sound. 10:16 minutes that elapses as dust. For me, ‘Lélekharang’ is the best song of the whole production. The double bass drum emphasizes the changes of tempos to avoid a monotonous sonority. ‘Csendesen’ is the fourth song, and where the atmospheric Black Metal fusion with some doomy elements takes birth, the chorus of the musical arrangement is catchy and melodic. The only but that I find to it, is the drum sound. It is not as organic as it is in the other tracks. It must be hard to find a really good drummer in Szombathely, so the choice of programming that apparatus could be the only answer. ‘Hazatérés’ is the most Black Metal track of the album, some of the riffs made me think of IN THE WOODS… In this 9:20 minutes, every instrument has its own life. The vocals from Neubauer are really dirty and appear when they are necessary. Despite the fact that the abuse of the piano is not of my interest and will never be, the tuning of this instrument is full of melancholy in ‘Hazatérés’. I think that the best way to finish “Lélekharang”, would be with this song, because concluding with ‘Moonlight Sonata Op. 27. No. 2. I. Adagio Sostenuto’ (a cover of Ludwig van Beethoven), can be seen as a pretentious movement. That German composer must be wallowing in cosmic dust through space echoes after listening to this. WITCHER is a band that keeps their own route, achieving what others try to find and do not know anything about it. More info at: www.facebook.com/witcherband, www.facebook.com/filosofemrecords