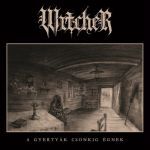 Hungary is mainly known for the legendary TORMENTOR, but bands like POKOLGÉP (Heavy / Speed Metal legends), OSSIAN, SEAR BLISS, MORBID CARNAGE, AGE OF AGONY and TYMAH are also Hungarian and proof of their deep existence in the underworld. Continuing the tradition, WITCHER started their journey in 2010 and till now released some demos and split releases and in 2015 they released their first full length album. In 2019, the album I have received, called “A Gyertyák Csonkig Égnek”, has been released by Filosofem Records (owned by the band), which contains five tracks; four tracks of their own and one cover of Pyotr Ilyich Tchaikovsky, of overall duration of forty minutes. Four years after the debut album “Csendes Domb”, they didn’t rush into either the songwriting or the recordings; the Hungarian duo Roland Neubauer (vocals, guitars, drummer) and Karola Gere (keyboard) was definitely deeply focused on quality and structure. The compositions are extensive and obsessive; from the beginning they invite you on a nostalgic journey with their atmospheric compositions. The development of the narrated story is interesting, as every guitar riff, harsh vocal deliverance and every keyboard theme creates a vivid image or an intense feeling leading the journey further. The production is bassy and raw, something that gives a colder feeling to the music while the mixture is balanced, emphasizing the keyboards. The key themes have been very nostalgic and will remind of the early melancholic, atmospheric bands of the 90s such as early EMPYRIUM, DIE VERBANNTEN KINDER EVAS or RAVENTHRONE’s first album. It’s quite fascinating that the title of the new album is the same as the title of a novel by Sándor Márai, which proves that there is a unified concept behind the Hungarian titles and what the songs are about! Roland Neubauer himself expressed that “the name perfectly symbolizes the concept of the disc. Because these poems can mean quite different things to everyone, but in general they are all about passing away, outright disregard for or rejection of the modern world, but more so of today’s degenerate values.” The Pyotr Ilyich Tchaikovsky cover ‘A Hattyúk Tava’ conceptually added nothing, but in terms of mood, they took the courage which results in a quite impressive listening experience. If you carefully want to listen to this description before you order a physical format, you can do so on Bandcamp, where “A Gyertyák Csonkig Égnek” can be downloaded free of charge. To all open minded, it deserves your attention where you cannot expect much change, but it continued to strengthen the atmospheric Black Metal genre with classical musical influences. Explore the band at www.facebook.com/witcherband and visit their label page www.facebook.com/filosofemrecords.