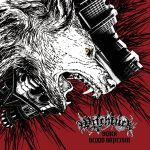 With a name like WITCHFUCk, you have something to prove. And hailing from Poland, you have even more to prove in the Black Metal genre. I mean… just look at a short list… MGLA, BESATT, INFERNAL WAR, BLAZE OF PERDITION, EVILFEAST, BEHEMOTH. It’s a plethora of aggressive Metal rivalling any country. So now here’s WITCHFUCK’s debut album “Black Blood Baptism”. The band members have been around the block a few times and know their Metal. And they prove it with a 12-song release of mind-gurgling Black Thrash. After the intro ‘March Of Doom’ with horror-movie-style keyboards and a few animal-like growls, ‘Black Blood Baptism’ (great song title!) meanders into the mix until erupting forth like a skull-shattering mace, pummelling everyone in sight. Hellscreamaross’ vocals remind me of Herr Warcrimer of INFERNAL WAR / VOIDHANGER fame or STYGGELSE’s Larsson, with its throaty, raspy banshee wails. ‘Unicestwienie’ (meaning ‘annihilate’ or ‘annihilation’) is a blast of furious guitars and blastbeats as ‘Sulfur Goat’ is a fist-pumping, rocking piece of blissful catastrophe. The fifth track ‘The Horned Archangel’ indicates the band isn’t letting up in this glorious album of pure Black Metal aggression. This is what we’ve come to expect from the Polish Metal underground. The musicianship is amorphous and unrelenting. ‘Pentagram In Fire’ is a table-flipping, neck breaking track followed by a brief ambient ‘The Pagan Storm’ that leads abruptly into ‘Hailing To The Stars’, a fucking swirling maelstrom of sonic savagery. Goddamn, WITCHFUCK is a devastating mass of vicious energy that doesn’t allow for a catch of breath. ‘Into The Fathomless’, ‘Dar’ and ‘Sabbath Of Unholy Lust’ continue the total chaos only to be wrapped up in a bloody tourniquet called ‘Pure Evil And Hate’, a BEHEMOTH cover. “Black Blood Baptism” will exhaust you. It will crush your fucking eardrums into miniscule fragments of cartilege. It will shatter your ribs with a spiked boot. And it will absolutely fucking bring you orgasmic elation in its Black Metal excellence. So put away whatever mediocre shit you’re currently listening to and crank this up. If it doesn’t make your top ten list at the end of the year, you’re not listening to it right. For more info, check out https://godzovwarproductions.bandcamp.com/album/black-blood-baptism and www.facebook.com/godzovwar