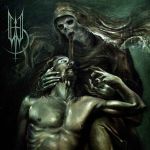 Since their formation in 2014, Germany’s WOLVES DEN have released two full-lengths. The second and newest is “Miserere”, a fairly well-produced set of Black Metal tracks. For those looking for rawer production, this might not be for you. However, the nice production definitely enhances the band’s sound, giving it a fuller, more atmospheric enjoyment. The cover artwork seems to depict death vomiting into the Messiah’s mouth. And isn’t this what we really look for in our Black Metal afterall? ‘Tides Of Hate’ begins with a tribal, warlike drumming mixed with a an underlying ominous bassline which propels into hypnotizing guitars morphing back and forth into furious, fast-paced riffs and staggering, humonculus-like electricity. The vocals are a raspy, sandpapery delivery. ‘Pfad Ins Dunkel’ is a slightly faster than mid-paced track that indicates a confidence the band definitely has. ‘Der Frost In Mir’ is a splintering, everchanging song that harkens back to old school blackness. ‘Nachtmar’ is a mostly slowed down track of mesmerizing guitars and alternating mid-to-low growling. ‘Haresie’ is the song you want to hear live… in your living room… as floating goatheads spit and hiss in your face. ‘Antalos’ begins with monk-like chants which I personally always adore. The track then becomes an epic mesh of pure Black Metal that rivals even the most accomplished bands. ‘Melancholera’ is another energetic track as ‘Nameless Grave’ ends the album with a kick-ass wrap-up. WOLVES DEN consistently deliver a solid set of songs in “Miserere”, which is rare these days. This is one of those albums where track by track you’re praying to the Dark Lord below for the band not to screw anything up. And they don’t. This is definitely worth a listen… or a hundred. For more info, check out www.facebook.com/wolvesdenband, www.trollzorn.de