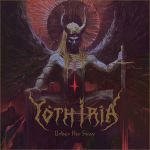 After more than two decades of absence from the world of music, Jim Mutilator, an original heavyweight in ROTTING CHRIST, returns with a new band. After being a creative part in the whole ROTTING CHRIST career up to “Triarchy Of The Lost Lovers”, the album after which the band turned Gothic Metal, Jim left due to family issues, and pretty much abandoned public musical activity. In fact, he also played on VARATHRON’s debut “His Majesty At The Swamp”, and so, together with “Thy Mighty Contract”, he participated in two of the most important and inaugural albums of the unique Greek Black Metal sound. Jim is joined by none other than Magus Wampyr Daoloth, of NECROMANTIA and THOU ART LORD fame, here on vocals, so this is obviously an EP which will cause ripples in the underground and is sure to raise attention. And indeed, YOTH IRIA (you may remember the name from the chorus of ‘The Fourth Knight Of Revelation’, the final song on “Thy Mighty Contract”) brings, as you might expect, an exalted invocation of the Greek sound. There are only three tracks for now, and they pave the way for the debut album that is sure to come. A piano intro in the wind introduces ‘Under His Sway’, a melodic but much metallic song, with proper use of choruses and keyboards. The exotic elements that are so distinctive of the Hellenic sound are clear to discern. The second track is even more ambitious and monumental. It begins with a majestic, oriental and slow-driven intro that gives way to a Black Metal fully reminiscent of ROTTING CHRIST’s early times, including the exquisite composition and the oniric ambiance. It ends with a cover of a track from ROTTING CHRIST’s early days, ‘Visions Of The Dead Lovers’, quite faithful to the original and therefore perhaps just a mark to further strengthen the bridge between the old past and the present and future… Doubtless, in spirit (and sound), YOTH IRIA is very much a continuation of the old ROTTING CHRIST by one of its main members. Even the mystical, symbolic, hermetic nature of the lyrics bears that familiarity. There are only three tracks here for you to get acquainted with YOTH IRIA (two if you don’t count the cover) but I would say the prospects are very promising. Welcome back, Jim! Greek Black Metal lives on! www.facebook.com/yoth_iria_official-294541961469236 and www.repulsiveecho.com are the places to go to know more.