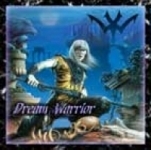 To tell you the truth, I was ready to shred this record to pieces. After all, Gabriel Wolf was already responsible for the infamous FINNUGOR release I reviewed in these very pages some time ago. And my first random listen of this one left me in a state of annoyed perplexity, to the point I found what I heard utterly lame and ludicrous. But I decided to give “Dream Warrior” another chance, because I never slag the work of an artist by pleasure and without solid facts to bring forth. And guess what, a more attentive listening of this album made me re-estimate my initial feelings. Let me tell you first that you will not find guitars and drums on this record. The sole element tying “Dream Warrior” with something Metal is the vocals of Gabriel himself, pretty extreme in the sense he overdoes them a little bit too much. More than often you have the impression of an evil Donald Duck whispering at your ears, and it could become unpleasant after a while. But thankfully the music makes up for this little annoyance, except for a stupid Techno remix featured at the end of the album. It is based on strong melodies performed on keyboards exclusively by Gabriel Wolf alone. The songs present a very charming and even bewitching character, once you listen to one of them, the main theme stays rooted deeply into your mind. I can’t call this ambient music per se because the structures are too solidly laid down, and it’s not Gothic music too. Gabriel seems keen to adopt the Black Metal tag to describe his main source of inspiration music wise, and why not? I read comparisons with AKHENATON and DAEMONIUM (two projects signed on Adipocere Records some years ago); I guess it is valid only if you keep in mind that no guitars are used on the YWOLF case. Lyric wise Gabriel Wolf explores Heroic Fantasy themes. From what I understood visiting Gabriel’s website, “Dream Warrior” echoes musically Heroic Fantasy books very popular in Hungary (YWOLF country of origin) and written by John Caldwell. Note that Gabriel appears as a fictional character in one of those books, an interesting fact if you ask me. And the CD features two “novels” (“novellas” should have been a more precise word, considering the length of the texts) written by Gabriel Wolf as a bonus, an unusual and original occurrence. All this to simply say that even if the music presented here may not instantly convince you, this CD should be listened to at least once. Personally I like the naiveté and the enthusiasm coming out of this disc, and I am glad to have had the opportunity to experiment this music, and for sure this album will stay in my collection. Give this refreshing record a fair try; you could be surprised just like me. To investigate more on the YWOLF discography, check the Gabriel Wolf’s web site at: www.ywolf.cjb.net. To end on a rather funny note, I would like to say that one the tracks (‘Key Of Dimensions’) was surely musically inspired by a famous EURYTHMICS song!