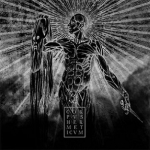 This is already the third album from this one man band of melodic and melancholic Black Metal from Poland. And it is actually quite interesting. Yes, it does have melody, but it is used with judgement and to emphasize the music. I am not completely sure, but it seems all the instruments are played by one man, including the drums, as they do not sound that lifeless or synthetic. And the production is very heavy with a really powerful guitar sound (which sounds to me a bit Death Metallic, but fits well). There is a slight flavor of SATYRICON here and there, although in a less pompous form, in a more direct way. The band sounds a lot better and heavier when doing mid-tempo as it shows the playing abilities more. At times they remind me of an upper-tempo SAMAEL. There is a very good guitar playing with some quite inventive riffs. Still, when the band plays fast, it spits venom from the speakers. ‘In The Mouth Of Madness’ is a proof of the variety the band can do, with great guitar solos, some serious riffs there and with a quite killer vocal delivery (again, not far away from the tone of that guy Satyr). The album also has a balance between songs and there is hardly a moment when the intensity doesn’t keep the listener hooked to the songs, something very few bands are capable of doing today with a whole album. The guitar playing is fantastic and something rarely seen as well done as here by a Black Metal band. A great discovery and a great album. www.zorormr.net, www.facebook.com/zorormr, www.vianocturna.com

Julián “I Am Legend” Núñez

Julián "I Am Legend" Núñez