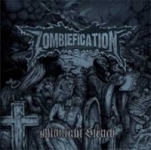 “Diary log, somewhere in the early 90s in a remote secret laboratory in Sweden… the experiments have been successful… at least in a way, they do. The virus we have created proved to be resistant to the outer environment, although grows better in colder lands… the first infected creatures were given names of Apocalyptic visions… one is NIHILIST… the other is TOXAEMIA… and a last one is GROTESQUE… at least the ones I can remember now… this virus we have named “Svensk Dods Metal” has proven to be too dangerous… quite infective I must add… by mistake the three subjects infected were supposed to be dead, thus buried outside… we should cremated them instead… for some reason they have awaken back from the dead… and are infecting in the nearby area… just we hope it does not reaches the shores… if water does not kills this virus, then it is too late for the human race…I left this as a statement to whomever it might concern… if you read this, it is sure we are all dead… dead…” “Diary log, somewhere in 2010 in a secret lab located in Mexico… the subject we are analyzing have been named ZOMBIEFICATION due to the weird strange form that bitten victims turns into… found a diary log in the secret documents, from what seemed to be a failure experiment in Sweden… this matches perfectly the description, of utter horror, I am afraid. The symptoms are all similar… bodies tremble with constant riffs of heavy guitars, pounding drumming from the heart and the scream and vocals… the pain that can be heard here talks about darkness, vision from the end and the rise of the undead… yes, probably nothing new nor different from the diary log that the Swedish (dead) colleagues were talking about… yet I found interesting that this virus has been detected in other places in the world… it seems that in recent years the virus has been coming out from nowhere, and that this infestation has no end in sight… sometimes the infection is not that severe and tends to turn into just a fashionable disease… but others, this recalls the horror of the originators… in this case, I am shocked to say it calls the last action…I have to stop writing here… my arm feels heavy… my breath is heavy… my heart is heavy… it seems I will soon face DEATH… end of the diary.” www.myspace.com/zombiefication666, www.asphyxiaterecordings.com