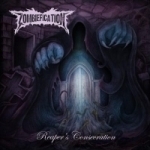 Somehow news of this band slipped past me these past three years. Now, with a demo, album and presently an EP under their belts, hopefully people in a similar situation as I will take an interest in ZOMBIEFICATION. Fans of the immortal Swedish style, devised by bands such as ENTOMBED, DISMEMBER, and the Sunlight Studio bands, should appreciate what ZOMBIEFICATION have to offer. Sometimes I wonder how it is that this band isn’t from Sweden. A song like ‘Deathrides’ sounds so much like an outtake from ENTOMBED’s “Clandestine” sessions, particularly in the vocals, that I can’t help but scratch my head and wonder if perhaps they are Swedish and just happened to move down to Mexico. And the guitars have a particularly nauseating buzz sound to them, like flies swarming dead flesh in February. Only something powerfully dead can draw vermin out into the cold with its stench. The strongest song on this EP must be ‘I Am The Reaper.’ It sounds like a forgotten INTERMENT song, in fact a song that I can see fitting in on “Into The Crypts Of Blasphemy,” INTERMENT’s years-in-the-making debut album. Although there’s not a single weak song on here, if you must sample only one song, make it ‘I Am The Reaper.’ You won’t be sorry! This is some damned cool Swedish Death Metal… from Mexico! www.zombiefication.com, www.facebook.com/pages/Zombiefication/342265749351?v=wall, www.chaos-records.com