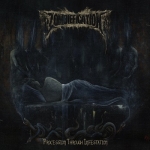 I’ve been enjoying some Mexican bands through out time: CENOTAPH, THE CHASM, SHUB-NIGGURATH, DISGORGE, DEMONIZED, HACAVITZ, DOMAIN, RAVAGER and now the time has come to get ZOMBIEFICATION under my skin, with their third full length. Guess I’ve been hiding under a rock, as I had not gotten around to check these guys out until now. The duo (yes, yet a duo, I am coming across quite a lot of those these days), debuted with "Midnight Stench" in 2010 on Asphyxiate Recordings, a raw and dirty Death Metal album with a old school thrashy sound, very much to my liking. They continued with the next album three years after (after releasing an EP in 2012): "At The Caves Of Eternal", released by Pulverised Records, sported a new take on the darkness, a surprising adventure into blackened Death Metal with quite a lot Black Metal references, especially as great melodic and freezingly cold guitar harmonies and melodies, which build up quite an atmosphere. Actually a quite good album, even though I didn’t see that development come. We are now writing 2014 and the band has signed to Doomentia Records and is ready with yet a full length attack entitled "Procession Through Infestation". The album seems like a summarization of the two previous albums, raw and dirty Death Metal with some Black Metal inspired parts, which is manifesting mostly as cold and atmospheric guitar parts again. Though the new output is somewhat more diverse than the previous two (really worked through and complete, though still nice and raw), even though we are getting a great deal of progression, together with experimenting vocals, from growls to mostly a bastard screamed vocal, which in some parts reminds of a higher pitched King Fowley. Another great thing, is the space the bass is getting in the production. Of course one of the main songwriters is the bassist, though that does not always equal killer basslines, nor a prominent role of the heavy strings, but it does on this album, and that slays! ZOMBIEFICATION has delivered an experimental album if I compare it to the two already released, which both followed paths already cleared, though on this one they are playing around and trying to get out of their boxes, and it works quite well. It actually reminds me of the time when EDGE OF SANITY started to play around, the playfullness, not musically. You are not in doubt of you are listening to ZOMBIEFICATION, if you know the band, though you’ll get a surprise or two during the 45 minutes the record lasts, some nice surprises, as the way the music is put together works. A brave and powerful album with Death Metal as the driving force, though with quite a deal of Black Metal and dark progression into the picture as well. This is one of those albums you just have to give a spin or three! Be sure to catch them touring Europe as we speak! www.zombiefication.com, www.facebook.com/pages/zombiefication/342265749351, www.doomentia.com