MORBID ANGEL. NOCTURNUS. INCUBUS. ACHERON. These are only a few examples of the impressive list of bands where Mike Browning was once playing in. About ten years ago, Mike quit ACHERON to start a new own band, AFTER DEATH. Just as NOCTURNUS, the material of AFTER DEATH is very original. The songs are maybe a little bit less technical but at the same time maybe also a bit easier to get into. Nevertheless, it still differs a lot from all the stuff that gets released these days, which is only a positive thing in our book…

AFTER DEATH was formed in 1999 after you left the band ACHERON. What was your biggest motivation to start an own band again back then? Did you want to go somewhere musically with AFTER DEATH which was just impossible with ACHERON? 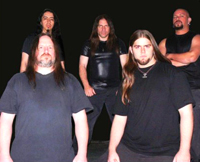 "I guess for once I wanted to have a band that was all about the occult and where I could sing and play drums and write all the lyrics for. Anyone who would join the band would know that right from the start. ACHERON was Vince’s band to begin with and I only played drums. I wanted my own band again like the way I had NOCTURNUS in the beginning."

I know you have a big interest in occultism. Apparently, you have studied the occult since about 1980 and you have a collection of over 600 books on the occult. What is it that attracts you so much in it? Would you say that AFTER DEATH is for you the ultimate outlet to combine your occult interests and music?
"Yes, that is true. I have had an interest in the occult since I was about 15 years old and about as long as I have played drums. My mom had some books on witchcraft so that was probably how I got an interest in it so early in my life. Definitely AFTER DEATH is a great outlet for the occult. I like to combine music and the occult together to create an atmosphere that people can actually see, feel and hear!"

Throughout the years, AFTER DEATH recorded an EP – "Vibrations" (2000) and a couple of demos ("Consumed By Fire" – 2003, "Reviving The Gods" – 2004 and "Secret Lords Of The Star Chamber Below" – 2006) which were released all together as a compilation, called "Retronomicon". Most of these releases were recorded each time with another line-up. Do you think that this compilation shows very well what AFTER DEATH stands for?

"I think it is a good representation of how the band progressed but also how the music evolved in the process. There are a pretty good amount of songs on there which still cover a lot of ground."

Musically, AFTER DEATH totally has the obscure and unusual songstructures which your band NOCTURNUS also had, combined with maybe a more occult influence and approach of old cult-bands like MERCYFUL FATE. Would you agree?
"Definitely! That is exactly what I was wanting to do with developing a stye for the band."

If you listen to "Retronomicon", I would say that the demo "Secret Lords Of The Star Chamber Below" is probably your most mature work. Would you say that this is also the release where you maybe found your own sound best?
"I totally agree! That demo is the newest recording on the CD, so we put it first and went backwards and travelled back in time as to when it was recorded, with the oldest stuff coming last. So when you listen to the CD, the newest stuff comes first, hence the name "Retronomicon"."

You also made a very remarkable video for the song ‘The Star Chamber Of Isis’. Do you think videos are still a good way to gain attention? What’s your opinion about how the music-scene works these days regarding the internet and mp3s if you compare it to the mid-eighties when everybody was trading tapes and a lot of dedication was demanded?
"A friend of mine, Johann Tetrault, did that video for us for free. So, it was something I have wanted to have for quite a while really. It is both good and bad because now you have the ability to reach just about anyone in the world but at the same time anyone can get your music for free too. The music goes in and out of style a lot faster now so people like you one day and then move on to another band right away and forget about you as fast. So it all has it’s ups and downs."

When you look at the artwork and your lyrics, it’s obvious that it’s influenced in a big way by the culture of Egypt. You apparently have a large collection of ancient Egyptian artifacts at your home. You’re also apparently often asked to teach classes about ancient Egypt and the Middle East at local colleges and schools and you’re qualified to be a museum curator. What is it that you find so interesting about Egypt?
"It is true that I have a big influence and liking for ancient Egypt and have a large collection of stuff and books, but I have never taught any classes or worked in a museum. I saw that that was mentioned in a Wikipedia-page that someone put up on me, so I am not even sure who wrote that but it definitely wasn’t me, although I wish I did know that much to be able to teach classes! I do have a decent amount of books on ancient Egypt and I use those as a big influence in a lot of the lyrics that I write. I have a certain spiritual connection to ancient Egypt that I accessed through magical rituals that has opened up a channel to that period and place in time. When I invoked the Egyptian gods, it immediately connected me to them like it was a past part of one of my past lives that I rediscovered. I think the more people sing and talk about ancient Egypt the more it gains power again. The way something gains power is by people thinking and acting on it, other than that it just becomes forgotten knowledge no matter how powerful it was before in history." 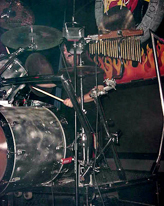 Even after all these years and after having played in many different projects, you’re probably still most known because of your work in MORBID ANGEL and NOCTURNUS. Both the albums "Abominations Of Desolation" and "The Key" have the status of a classic. Do you think that this is a pity, as the stuff you did later on is definitely also worth picking up?
"Well, it has been a long path. At least I can say that most of the bands I have been in and the albums I have recorded with them have become classics, so for that I am very happy! I think that my new stuff is a continuation of what I have always done, but also with new stuff thrown in as well. The stuff I did in the past was always ahead of its time and usually appreciated a lot more years after it actually came out, so maybe that will happen again with AFTER DEATH! I never regret anything that I did in the past. I have always done music for myself first. If people don’t like it, I really don’t care because I do what I do for me and not for them!"

I read that apparently AFTER DEATH toured in Europe under the NOCTURNUS banner some time ago, playing the entire album "The Key" plus two old MORBID ANGEL classics and some AFTER DEATH tunes. I didn’t even know that such a tour had happened. When was that and how did It go? 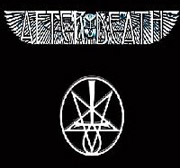 "Overall that went pretty well, to be honest. As you can imagine the shows in the bigger cities were really good as were some of the smaller ones, but overall I think it did well. The people that were there were really into it, so that is what matters most to me! Almost every night we had multiple encores and even ran out of songs to play and had to repeat them."

You have been active as a musician for like 25 years now. How do you look at your evolution as a musician throughout the years?
"Everything I have done has made me to what I am today and for that I am grateful! And if you look at a lot of my lyrics from the album "The Key", you will see predictions everywhere in my lyrics that describe exactly what I am doing today!"

In 2009, AFTER DEATH recorded a new 4-track demo which has just been released officially as a split-CD. Was this mainly to attract the attention of record companies? Did you get a lot of response to it?
"We recorded 5 songs in 2009 and put some of them up on our myspace page for people to check out. Just as we were going to start putting it out as a demo CD, we were approached by a label in Chile called Proselytism to do a split-CD with the band UNAUSSPRECHLICHEN KULTEN. So, we had the songs remastered by my friend Patrick W. Engel at ‘Temple Of Disharmony’ in Germany and added another song that we never released from that recording-session. The CD is out right now."

It took quite some time to get the split-CD officially released. What was the main reason for this?
"Well, the CDs were ready at the pressing plant already quite a while and the covers were also done, but we still had to work on the booklets, that’s the main reason. We waited to be able to take pictures together with UNAUSSPRECHLICHEN KULTEN at a graveyard when we were in Chile. I prefer to rather wait a little longer and have a cooler packaging. There is also talk about a vinyl release in the future but that’s not confirmed yet."

When you where in Chile, you also played a couple of shows. How did that go?
"We did 3 shows: 2 in Santiago and 1 in Valprasio. The crowds were awesome at all 3 shows, we did several encores and played every song we had rehearsed for the set and they still wanted more!!! They were also singing to the more familiar stuff that we do, there are several videos on YouTube already so you can see for yourself how great the Chilean Metalfans are!!!! Right now, we will teach our new bassplayer Daniel Tucker (ex – OBITUARY) the rest of our songs. He learned 17 songs in 2 months so we would have a bassplayer for the tour. Hopefully with this tour in Chile being pretty successful, we can go to Europe this year for some festivals. I still haven’t done a really big festival yet, so that is still a personal goal for me! Also we are almost done with mixing and mastering a cover of VENOM’s ‘At War With Satan’ for a VENOM tribute album that Iron Pegasus will probably release later on this year. Our version lasts over 20 minutes, beware!!!"

Anything you would like to add?
"I just mainly want to say thanks for the interview and your interest, Steven. Look out for that split-CD on Proselytism Records that is out right now. You will be seeing a lot more of AFTER DEATH this year!!!"