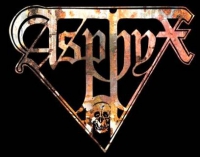 ASPHYX is a living legend, and was probably one of the oldest Death Metal bands out of Holland. Their style was really unique and I always loved them for that. Their latest and totally crushing album “On The Wings Of Inferno”, featured the original ASPHYX members Bob Bagchus and Eric Daniels, and bass-player Wannes Gubbels which I really don’t have to introduce anymore. “On The Wings Of Inferno” is one of the (if not the) best Death Metal releases so far this year which easily proves which bands are still the kings in this kind of music. As you know, ASPHYX split up at the end of August this year, but who knows if they ever get together again? The interview was done with Wannes right after the release of the new album.


When did you decide, because you already released the excellent album “Feeding On Angels” under the monicker SOULBURN, to resurrect ASPHYX from the dead?
“We got that idea pretty spontaneous when we were playing a rehearsal in our rehearsalroom. With SOULBURN, we were working on some new songs, and we came to the conclusion that our new material sounded even more as ASPHYX as the songs on the “Feeding On Angels” album already did. The songs sounded a bit more technical, and they sounded also as pure ASPHYX material. When we played a gig with SOULBURN, we always played also several ASPHYX songs like ‘Abomination Echoes’, ‘Vermin’ and ‘The Sickening Dwell’, also in our rehearsalroom, which gave us such a good feeling, that we started asking ourselves what we were actually doing. Bob and Eric got a very good feeling while playing those songs. Bob did THRONE in between, Eric joined ETERNAL SOLSTICE for a while, but in the end they always returned to ASPHYX. So, we made the step from SOULBURN back to ASPHYX quite naturally. SOULBURN was a bit more low-profile, while ASPHYX has already released so many albums, people expect much more of ASPHYX, and so we have to put much more effort in this, especially promotionwise.” 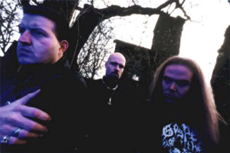 Did Bob and Eric ask you themselves to become the new ASPHYX frontman?
“Yeah, because our cooperation with SOULBURN was already really good. You see, we all have the same background, we also have hardly any real discussions about the style of music, because we all want to play extreme Death Metal.”

I didn’t know Eric played a while in ETERNAL SOLSTICE.
“When the line-up of the “Asphyx” album collapsed, Eric stopped playing music for a while, but in the end he still wanted to play music. Then, he got the proposal to join ETERNAL SOLSTICE as a second guitar-player. A big problem was the distance though: he had to travel from one side of Holland to the other, so that meant leaving every sunday 8 o’clock in the morning and come back around 11 in the evening, so that didn’t work out in the end.”

Have you never considered to get the old ASPHYX guitarist, Tony Brookhuis, back in the band as well?
“To be honest, that thought did slip through our minds. See, we only have one guitarplayer, most of the musical ideas come from Eric, and I can imagine that after recording so many different albums, a person starts to wonder from where he should still get some musical inspiration. Eric is a very tight guitarist, he comes up with very effective guitar-riffs, but I guess that Tony could have helped him with that. But Tony is busy with totally different things these days, and it was especially Bob who was a bit afraid that if Tony would join again as well, totally different musical ideas would come into the band. That’s also the reason why Tony left ASPHYX in the first place so many years ago. I’d say that VAN HALEN was more in his head than VENOM, I guess you get the picture (laughs). ASPHYX has always been a pure Death Metal band, you can’t find any VAN HALEN influences in our music I think.” 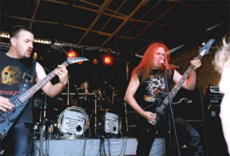 As most of the fans probably know, the earlier vocalist / guitarist of ASPHYX, Theo Loomans died not that long ago (he got stuck with his car on the rails of a train, and the train rode into him – S.W.). It probably wasn’t an accident, was it?
“Well, the first thought that got through my head when I heard the news, thinking about the problems he had back then at the time around the cancelled “God Cries” tour, was that it probably was a suicide-attempt, but nobody will ever know for sure for 100%. I also changed my opinion because I’m just not 100% sure. Theo had a lot of problems with himself, he didn’t know anymore what he really wanted. Bob knows Theo already longer than I do, and knows so much more about him than I do, I guess he could give you a better explanation.”

If I remember right, Theo also caused quite some trouble between DEADHEAD and ASPHYX many years ago when he burnt a DEADHEAD T-shirt on stage.
“Yeah, but somehow that thing got totally misunderstood by the press. You’re referring to an ASPHYX / DEADHEAD gig in Bodegraven (Holland). ASPHYX was very occult at that time, Theo was very interested in those topics at that time, his lyrics were also kind of satanic in a way. What I have always understood and what Bob told me is that Theo bought that DEADHEAD T-shirt and burnt it that night as a sacrifice to Satan, to make sure that things will go well with DEADHEAD, it was totally misunderstood by the press.” 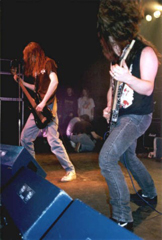 Was it easy for you to write the songs for “On The Wings Of Inferno”?
“Actually yes. ASPHYX has never been a band who really works for a very long time on songs. The songs are actually more written through the playing of riffs in the rehearsalroom. After we had written the first song, ‘Chaos In The Flesh’, which is also my personal favorite by the way, everything went very fluently. ‘The Scent Of Obscurity’ and ‘Indulge The Frenzy’ are also one of my favorites. We recorded the album at the temporary Losser studio together with Harry Wijering, because as you know, the old Losser in which also the ASPHYX rehearsalroom was located, burnt down to the ground. The album sounds very raw, it’s very close to our live sound. Concerning the sound, “On The Wings Of Inferno” is also much closer again to the first ASPHYX albums. It sounds very rough, very honest.”

The album also doesn’t last that long, about 30 minutes. It doesn’t disturb me at all, but I guess some people will mock about it anyway, right?
“Well, we didn’t get negative criticism, but people do notice that it’s a short album. Both me and Eric, when the songs were written thought that all together it would have been close to 45 minutes, but it turned out to be shorter than expected. It’s of course always nice to offer the fans value for money, but on the other hand, we just didn’t have any more songs. We also thought about recording a cover or re-record an old track, but in the end decided not to, cause they’re just fillers. As it is now, the album is short but honest, it has fast, slow and mid-tempo tracks and I think every ASPHYX fan can get into the album. Personally, I think the album has a good drive, you don’t get bored, and you’re longing for more. If you release an album which lasts about an hour, I know from experience, it’s sometimes very difficult to listen to it from start to finish. “God Cries” also didn’t last that much longer as “On The Wings Of Inferno”.” 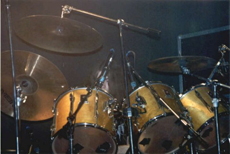 I guess that the lyrics of the album are also written by you, because I know that Bob has the opinion that the vocalist of a band should also write the lyrics.
“That’s correct. In PENTACLE, I always wrote about the things that happened around me, and this time, I could do something completely different. Since I was a small child I already have a big interest in the second World War: I’ve seen so many movies, I read books about it, I played with little soldiers, and I wanted to use that part of my personality also once to write lyrics, and so I did. I’m very inspired by Sven Hassel, he’s a Danish writer who fought on the side of the Germans during the second World War in a camp. His book doesn’t praise war, it also doesn’t take the side of the Germans, but it gives a very good and realistic idea of the madness of a war. Some songs on the new album are about that theme, for example ‘Summoning The Storm’ handles about sky-terror, planes who really bomb everything while ‘For They Ascend…’ handles about submarine-warfare. On “Last One On Earth”, you also had 2 songs about war, that’s ‘M.S. Bismarck’ and ‘Asphyx (Forgotten War)’. ”

Recently, you told me that the planned ASPHYX tour for this year won’t take place. Why?
“The main thing is that Bob as well as Eric can’t get enough days off to go on tour. Eric works in the house-construction, and he can’t take all his days off in just one period. When we would go on tour, it would be for about a month, and Eric can’t stay away from his job for such a long period. Bob is also not that font of touring, but he likes to play a gig once and a while. So, I guess that the tour ASPHYX did with BOLT THROWER and BENEDICTION in 1992 was and will be the last real tour that ASPHYX has ever done or will do. Nevertheless, I really think it’s a pity that we won’t go on tour.”

What are the last Death Metal albums which made a big impression on you personally?
“Hahaha, I always like those kind of questions (laughs). Well, I think the CENTURIAN debut album is really good, DIABOLIC, IMMOLATION, DEATHWITCH, ABSORBED, the last NILE album, which made me really re-appreciate the American Death Metal scene again, cause I was losing that a bit. Further there’s HATE ETERNAL, very tight and technical and AKERCOCKE, that’s a band from England who released a CD by themselves. It’s a sort of mix of typical american Death Metal like IMMOLATION and INCANTATION with some weird VOIVOD and new wave influences, a very interesting and very original album, check it out!”

So, boys and girls, you heard it, check out the latest ASPHYX album, cause it simply rules! Death … The Brutal Way !!!