In the early 90s CADAVER was one of the leading extreme Metal bands from Norway. Then they broke up and their promising future turned into a dark one. But they were not forgotten and when CADAVER INC. officially released their great debut album there was no excuse for not having a chat with Anders about the past, present and future of his new old project and especially about the highly original concept of CADAVER INC.


When and how did you get hooked to Heavy Metal, was it a concert, a record or maybe a friend?
"I was hooked on Heavy Metal after I discovered that KISS was no good anyway in 1983." 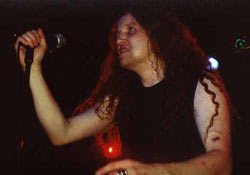 Do you remember your first Metal record and concert? What was it like?
"SPEED KILLS Vol. 1. Best compilation album ever! Full length album "Powerslave" by IRON MAIDEN which I didn’t like at all. I just heared it was the best Metal album of the year on the radio in 1984, but then I got the "From Hell To The Unknown" with VENOM and said FUCK OFF to normal Heavy ever since."

What exactly did you do between CADAVER and CADAVER INC.?
"I was session guitarist in APB, had different noise projects etc. and did some remixes etc. I always wanted to have a new Metal band, but it takes time to find the right people available for it, so that’s why it took me some years."

What’s the reason for playing extreme Metal again? What changed your mind?
"I think the time was right for me to turn the page and do what I strongly belive in again. It’s not satisfying to play in a EBM band when your heart is Metal. My only problem was that I didn’t want to just join another Metal band. I needed my own crew where I make the riffs, so when Czral, LJ and Apollyon were ready I just went for it and burnt all my other safety bridges!" 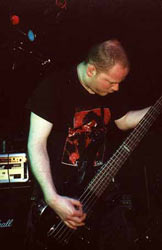 What inspired you when writing the songs for "Discipline"? Was it a long process, are there any songs on the album you wrote long ago or did you come up with the album in a short time?
"The oldest riff on the record is written in 1988 and the same goes for some of the lyrix. It’s all ideas with a long time spand, so I can guarantee that the next album will be different from this one again when we’ll focus on new ideas only."

How did you come up with the concept of CADAVER INC.? Did you watch Pulp Fiction?
"I’ve seen that movie yep. There was a time when I dressed like "Reservoir Dogs" in black suites etc. I’ve been into the underworlds of crime etc. for ages. I think the stories from real life like what "Godfather" portraits is more facinating than any stupid science fiction or ha ha action movies. To kill and get away with it is intimidating for our minds. Everyone has a dark side in them, some more than others. I wanted to tease people’s minds but presenting something real / not real that could be done."

How did you get in touch with the other CADAVER INC. members? Did you rehearse a lot?
"Fenriz (DARKTHRONE) introduced me to Czral and Apollyon in 1995. LJ Balvaz is one of my oldest friends, and I’m very happy we’re all in this band together now. We rehearse 2 – 3 times a week."

Unfortnately I don’t have the lyrics for "Discipline" – could you explain the lyrical concept of the album?
"There is no concept other than themes about death." 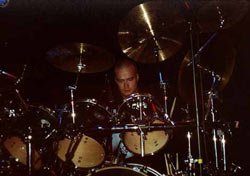 I really like the concept of CADAVER INC. and your website excellently supports it – but don’t you think that this concept gets a problematic touch because of Faust’s contribution? This is more than just a cool image for an extreme Metal band…
"He killed someone and got away with it if it wasn’t for his churchburning friends. It’s nothing COOL about this, it’s facts. He’s a friend of mine and I think it’s important for a guy that spend his entire twenties in jail that he got friends on the outside that keep in touch."

Can you describe your feelings about the three aspects a Heavy Metal musician usually has to deal with, namely writing music, recording songs and playing live?
"Writing is very easy for me. I just pick up the guitar and play stuff. Recording is stressfull, but I love the mixing process. Playing live is the only way to get a direct responce, and all bands love to be out there playing live!" (I seriously doubt the last bit – Ramon) 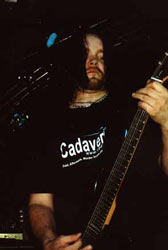 And how did the shows with MORBID ANGEL and ZYKLON go? What do you think about this mixture of different styles on one stage?
"The tour was just perfect for us. We had done 2 gigs only before the tour and now we did 26 in a row. The mixture of the bands was great, but you’ll have to ask someone that where at a gig how they think it was."

What are your plans for the future with CADAVER INC. – is it just a fun project or do you expect more from it?
"This is a real band and we intend to create more albums and tour all over the world!"

What do you do when you have spare time at home? Something else apart from playing music?
"Right now I have no spare time at all. I have no other hobbies or anything else but music. The only thing would be computer games sometimes, or simply surfing the internet." 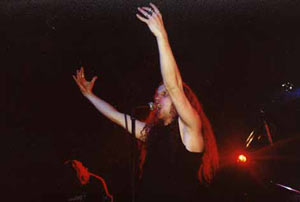 Do you have any funny or interesting stories to share with our readers, maybe from the early days or from your life on the road or both?
"It’s many things that I could tell you, but I remember one thing clearly and that’s CRADLE OF FILTH playing support for us at 4 gigs in England in 1993, and loosing a football contest between the two bands. When they got so big I remembered the boys asking all the kinds of things about the Norwegian scene and if the guys where serious at the time. 3 months later Euronymous dies and I gave myself a 2 year break from the scene. Then I pick up Metal Hammer for the first time in 2-3 years and see CRADLE OF FILTH on the cover thinking "how, why what?""