We originally had planned to bring you a completely fresh and brand-new in depth CARNAGE interview in honor of their legendary "Dark Recollections" album, which recently got re-issued via Earache Records (with the tracks from both their demos as a bonus). And their former guitarist Michael Amott had already agreed to answer our questions, but all of a sudden (and to our big disappointment) shortly after decided not to do it… His reason: not being able to remember all the little bits and pieces from those early days in his career… Oh well… So, we just put together our own little story, by re-printing a couple of interview answers from different sources. Hope you will dig it…


CARNAGE had a different drummer before Fred Estby joined, a guy named Jeppe Larsson…
Johan: "Yeah, he played on the first CARNAGE demo, "The Day Man Lost" from ’89. He’s just a normal guy, hanging around like everyone else and we had chosen him for CARNAGE as he was so perfect. He was almost the ultimate drummer we could find…"

What is he doing now?
Johan: "He’s doing nothing I think. He was involved in some kinda band project called MEDICINE RAIN, but I don’t know if they have split-up or not…"

Why has he left CARNAGE back in the early days?
Johan: "He was tired of the whole thing, he didn’t really like the music, so it was natural for him to leave us…" 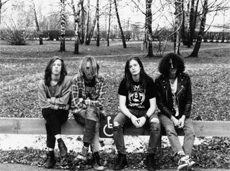 Have you asked Fred to join or did he ask? Who’s idea was it that he should move to your town?
Johan: "That was Fred’s idea! He called me up at 2:30 in the morning (haha, during a party of course), told me that he was interested in joining CARNAGE and prepared to move down here. But things have changed a bit and we’re the ones leaving Växjö, moving up to Stockholm instead."

You’ve also got vinyl offers… Tell us about them!
Johan: "Yeah, WEA called us up one day… Ha, just kidding! Ok, when we released our first demo, people from different labels asked us, if we were interested in doing split singles or whatever. Metalion (of SLAYER MAG) asked us, if we were interested in doing a 7" with DISMEMBER and NIHILIST, but that never turned into reality. (too bad, really! – Frank) And one day the guys who were running the Gore Records label (also members of FILTHY CHRISTIANS) got in touch with us and said they wanted to release a 7" with us. It was supposed to feature two new songs, but that never happened as well due to the usual problematic stuff… there was always talk about something we could do…"

But there IS a CARNAGE LIVE 7" on Distorted Harmony Records (recorded on November 4, 1989 in Stockholm)! Is that an official release or a bootleg?
Johan: "The guys who run the label asked Michael when he was with CARCASS in Mexico, if it was ok if they release that Live EP. And he said it is ok, so it was no big deal, because each member got a few copies of it and we were happy. It is a pretty brutal sounding, but not a proper release…"

The second CARNAGE demo "Infestation Of Evil" was originally supposed to be called "Kill Your Master"…
Johan: "Yeah, hahahaha! You’ve done your homework!!" 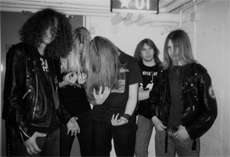 Who came up with that title and why have you changed it in the end?
Johan: "Well, we thought about "Kill Your Master", but later on we got the more evil approach, so… hahaha… We saw a flyer from a Mexican fanzine or something called INFESTATION OF EVIL and we said ‘Wow, we gotta have that!’, so we took that one instead…"

When did CARNAGE become a five-piece band?
Johan: "After the second demo we had five members… Fred on drums and David from DISMEMBER on guitar… But we had another five-piece line-up earlier already… There was a different bass player in CARNAGE before Fred joined us…"

What were you doing besides CARNAGE? Working, studying, nothing, drugs???
Johan: "Besides playing with CARNAGE we were doing nothing! No, seriously… The usual things: working eight hours a day, listening to good music, watching good movies, videos, going to gigs, eating, drinking, sleeping and so on, you know? Drugs? Well, we were not really into that stuff, but when there was a party or something like that, we did drink! But to tell you the truth, it has not been too often that this happened. It’s just a waste of time and money!!! Johnny was the biggest drinker and once he even slept outside in the grass. We’ve got a photo of that one and it’s very funny! You should see it, you wouldn’t believe it!"

When and why have you split-up with CARNAGE?
Johan: "When we were about to do the album, they wanted another kind of vocal style, so they asked me to leave the band. I growled too much at that time and they wanted a more standard Death Metal voice, like the one you find on the album. And Matti Kärki did that, so…" 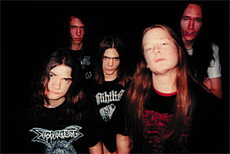 Have you been disappointed in any way that you haven’t been involved in the first and only CARNAGE album?
Johan: "Of course! The following six months after my departure I had a really hard time. Emotionally it was a disaster, because I did so much for the band, I built it up, created it from the beginning and then you don’t fit anymore… So, it was very hard for me, but it’s all in the past by now."

With your next band FURBOWL, you still played ‘The Day Man Lost’ live… Have you also played any other CARNAGE material?
Johan: "No, that’s the only one…"

Has there ever been talk about reforming the old line-up for gigs or something like that?
Johan: "Yeah, that happened, but it was just talking, you know… ‘Hey, we do a second LP’ and stuff like that… Michael just talks too much, hahaha!"

So, you never played together as CARNAGE after the split-up?
Johan: "No… just talking…" 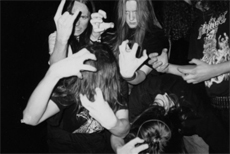 I’ve noticed that there were some songs that weren’t used for the CARNAGE album and remain lost on obscure rehearsal tapes. Haven’t you ever thought of releasing those good old tunes in some way?
Michael: "Well, it’s only rehearsal tapes, but I guess that doesn’t really matter. You can put it out anyway with a cool cover or so, hahaha! I wouldn’t really mind if it was done in a good way with a lot of cool pictures, story and everything. That would be fun!"

So, at least you aren’t gonna use that unreleased material for ARCH ENEMY… But I remember NECRONY used to play CARNAGE classics and even FURBOWL did in their beginning. So, have you ever thought of re-doing those unforgotten tracks for certain occasions?
Michael: "Yeah, that NECRONY CD was pretty cool with that funny cover artwork! Actually a German band called DEAD also did a cover version on a white vinyl 7" and DISMEMBER played the CARNAGE stuff as well! But yes, we have rehearsed one track, which is ‘Torn Apart’ and we might also do ‘Infestation Of Evil’! You know, that’s a part of something me and Johan once did and it would be pretty cool to play it now, because I’m still into it and we’ll surely play it better than we did then, cause we got better musicians and so on…"

What is Johnny doing these days? I haven’t heard him since he was in ENTOMBED and was rumored to have handled the vocals on "Clandestine", what I still don’t believe!
Michael: "Oh, I don’t know. He hates me, I think. There was a lot of stuff… I guess, I was an asshole towards him, because I played bass on the CARNAGE album and told him that he was too shitty and lots of stuff like that, which I regret. But I guess it’s too late now?! No, I don’t think he did the vocals on "Clandestine" either, but he played with ENTOMBED live and did some tours with them until he got fired. Later on he formed SPIRITUAL BEGGARS with me from the start, initially, but then I told him that I wanted to do it myself, being the only guitar player. So, yeah – I think he really hates me! He must be pretty bitter and I don’t have any contact with him, unfortunately enough. I met him at a festival in ’95, but he refused to talk to me…Hmm…" 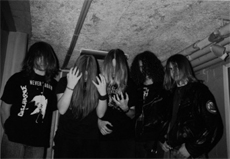 Johan used to have Axelsson as surname back in the CARNAGE days, but calls himself Liiva now…
Michael: "Yeah, he’s just taking his mother’s name, because his parents split-up. I think he preferred that name anyway, cause it’s a name that comes from Estland / Lithuania, whatever… and he might think it might sound more original?! Ha! He just felt better about that!"

What are your most memorable moments in the CARNAGE career…
Michael: "I think a very exciting period for me was when we did those two demos, because that was when I really got involved in the underground. We had our first demo reviewed in the Dutch Metal Hammer / Aardschok by Wim Baelus, the old underground hero. He reviewed it with a picture and we got like 400 or 500 letters from that. It was just incredible, such a great feedback. And we set 3 dollars for the demo, so I got like 350 letters maybe with 3 dollars in it! It was just amazing and that was how we got into the underground. So, I think it was through Wim Baelus, really, which is strange, I guess. That was a really exciting time, cause me and Johan lived in the same apartment which we shared and we were just sitting at home copying tapes all the day, everyday and copying covers… it was just an exciting time for the band and for me musically as well."

(parts of this interview have been reprinted out of VOICES FROM THE DARKSIDE # 5 and #10; additional interview parts by Leif Jensen and Peter Aubele of SCHARMÜTZEL ZINE;

used without permission; edited and partly re-written by Frank Stöver)