DECEASED is a wonderful and absolute cult band that has been around for more than twenty five years. The band debuted with "Luck Of The Corpse" (1991) and made a big impression with "The Blueprints For Madness" (1997). Gradually, their very own style of Death / Thrash got more and more melodic, something which lead to the masterpiece "Fearless Undead Machines" (1999), to my opinion still the highlight in their career. DECEASED recently went back to the Assembly Line studios to record their sixth album, "Surreal Overdose" so we had to contact mastermind King Fowley for some updates…


You recorded a new album called "Surreal Overdose" which will be out in April. What can you already reveal about it?
"The album has eight new songs on it. Some titles are ‘Skin Crawling Progress’, ‘The Traumatic’ and ‘Dying In Analog’. We’ll lay it all down at the Assembly Line Studios, just like we did with the last one. It’s 100% DECEASED and from the heart. I’m really looking forward to putting it all down and committing it all to tape!"

The artwork of the new album looks brilliant once again and was done by Raul Gonzalez. What’s the deeper thought behind it, for example the man on the left – reading in his bed – and the woman on the right?
"It’s great art indeed. He painted my idea exact! The meaning to me is that so many things are going on around us all the time. Good, bad and otherwise! What do we see? What do we miss? Is it all illusion? Is there dread waiting for us all? The people in the picture represent peace and tranquillity as well as horror and despair."

The idea of the ‘dancing arms with the butt cheeks’ on the cover is obviously taken from the movie "The Devil Within Her". What is it you like so much about this movie and the idea of these hands?
"Well, I’ve always loved the image. I felt it was odd enough to be part of the painting. The shape of the ‘creatures’ represents oddity, which to me is always something that many don’t understand. It’s the ‘unknown’ coming after us!" 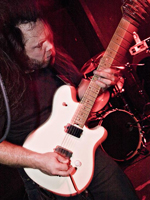 You play drums on the new record but live, Eric Mayes will keep sitting behind the drumkit during live-gigs. Why didn’t you let him record the drums also?
"I have written always the drum parts, even on the last record I wrote it all for Dave. Dave left the band and Eric entered. Finding time for Eric to play in the studio and teach him the parts has been little to none. We all live so far apart now we spend what time we have together on live set practices. As I’m writing the parts I might as well record the parts. I want to also see where I stand as a drummer in the studio now. I haven’t recorded a record with the band on drums since my stroke in 2004. We’ll see how it goes. I’m excited to show everyone listening how far I’ve come back from my nerve damage issues."

"Surreal Overdose" is the first album which features guitarist Shane Fuegel. Did the atmosphere and the recording of the album in the studio differ a lot from your earlier work because of this?
"Since we haven’t recorded yet, I can’t but speak from Shane’s help and support on the livefront. He’s a quick learner, a precise learner and very professional with his sound, playing and being a part of the band. He’s known us and supported us forever. He knew the old tunes from growing up listening to them. He understands the way we are as a band. He’s really fit in and I’m excited to record with him. It’s all worked out very fast and very spot on. He fit right in!"

"Surreal Overdose" will be the first album on your label, Shrieks From The Hearse Records. Why did you want to start your own label? How will you handle the distribution? And are you aware that it is almost impossible to find any older DECEASED albums over here in shops in Belgium and the Netherlands and that one really has to contact more underground-focused, small distributors to find any DECEASED release at all?
"We actually already put the re-issue of "Fearless Undead Machine"’ out on Shrieks From The Hearse and it worked out great! Relapse dropped the ball so many times. They were a headache and we got tired of lies and bullshit. I know so many folks and I’m working to get the record everywhere. I don’t doubt that the old stuff is impossible to find. Relapse never did their end of the job. Hopefully this go ’round you’ll be able to get it very easily."

You’re also working on a DECEASED DVD for already quite some time which will be called "Digital Graveyard". What will be on this DVD, a show and maybe a sort of ‘history of the band’? Any idea when this DVD will see the light?
"There will be tons of stuff on it. Laughs, jams, shows and commentary. We’ve got 25 years of footage to put in. I want it to be right! It’s taken so long because I’m still asking for footage from friends and people all over the world. I hope to have it out by the end of the Summer 2011. It will be very entertaining I can promise you, if you are into the band!"

As far as I know, the only time DECEASED ever played in Europe was in Wacken 2001. I heard some rumors that you will get over to Europe in 2011. Is this correct? Any idea of the countries where you will play (will the Netherlands and Belgium be included)?
"Yes, Wacken was indeed the only show of DECEASED on European ground so far in 25 years! We’ve had some contact to go back overseas but nothing is confirmed yet. Any promoters reading, make it happen! We’d love to come and show those overseas all that we are about as a live band. No half assed here. It’s all or nothing! We’ve been ready!"

You’re often on facebook where you post funny pictures and give tips for good old horror movies. To me, you really come across like someone who really enjoys his life to the fullest and also really has found ‘his’ space on this planet. Any comment?
"I just love my life! I’m very happy with everything! I am a smiling fun-loving kind of guy and that’s all I know. I’m a savage when you fuck me and a gentle giant all the rest of the time! No bitching or moaning here! Fun is where it’s at!"

A couple of years, you have been rather seriously ill as you had serious problems with a stroke you had. Luckily, it seems like you’re much better again. Did the time that you were ill somehow also change your general view on life?
"I had some issues with blood clots that led to clots in my lungs and a stroke. I’m on blood thinners for life and that has really settled it. My views of life did get more intense. Even more then ever it became ‘live for today’! I spend less time waiting and more time doing! I love life!"

DECEASED exist already for over 25 years in the meantime and really have a cult following. What is it you think that made your band keep on going though all the ups and downs throughout the years? Would you say that you’re in a way ‘grateful’ for everything that you experienced with the band?
"Sincerity is all it’s about. We got into it to make music we love and that passion has never slowed for me. Music is very much a big part of my life! Ups and downs are life! Life ain’t perfect, nothing is! You march on and do your own thing. You don’t worry what others are doing or trends that come and go. I’m grateful for having life and having the band and making music that keeps me grounded and in stride with what I feel my purpose in life is." 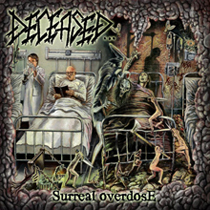 I was also wondering about the following: you’ve been around in the underground for ages. When you compare the scene of the mid-eighties (the tapetrading, writing letters, the dedication of many people, making fanzines, the underground-gigs) to the scene of today (where you can almost find anything on the internet, where communication is so much faster, mp3-files and downloading, tons of 3-day festivals with like 80 bands and a general ‘bigger, faster, more’-attitude) what comes to mind then? Would you say it’s better or worse?
"Both have its place. It’s easier to learn now and it’s all right at the edge of your eyelids on a computer screen. It did take much more effort back in ‘the day’, that’s for sure. You had to write letters and mail to penpals for tape trades or magazines. It showed a lot of passion. Now it’s easy to achieve all of that. It all comes down to integrity. It’s easy to spot someone mocking / abusing the music scene. You just ignore them and keep on pushing on. There’s pros and cons to it all!"

Over here in Belgium, tinnitus and the volume at gigs in general has been in the media a lot within the last couple of months. Our minister of culture proposed a law to limit to the sound at festivals to 100 db (= an average of 100 db, measured over 60 minutes) which got approved by now. This is a very good idea to my opinion. Since you’ve been playing music for already so long, I was wondering if you never had problems with your hearing? Do you think the volume at gigs is too loud?
"Music’s actually never too loud to me! It’s when it’s too distorted and sounds like shit that I have issues. A great loud sound is wonderful. But poor mixes and improper stage sound can really mess you up! My hearing is actually fantastic, still at the age of 42. I don’t wear earplugs and just get up and go. Long live the loud! :)"

Anything you’d like to add?
"Thank you so much as always Steven for the support. Someone reading this: bring us to Europe! Check out our website www.upthetombstones.net. The new record will be out in April (it’s out by now – Steven)! Be yourself and keep your determination! Up the tombstones!"