A classic case of long questions versus short answers is my talk with Brian Hoffmann (guitar) concerning the band’s excellent new album “Scars Of The Crucifix”, which proves that these guys can still kick Christian ass after being active in the Death Metal scene for more than 15 years! Despite the aforementioned setback the interview came out quite ok and shows that the guys definitely know to behave better than their reputation might suggest… DEICIDE have always been one of these bands you either love or hate and I certainly belong in the first department, so I feel glad that I could do this interview and the information it contains is at least compact, haha. Finally I know that Brian nor Eric are gay… what a pity… no just kiddin’, hope you enjoy this – in the true sense of the word – small talk.

First of all I have to kiss your butt for releasing such a great brutal and possessed sounding album! Since “In Torment In Hell” was in my opinion the weakest DEICIDE effort ever, I did not expect such a hellish masterpiece! Are you happy with the new album yourself and your performance on it?
"I agree with you about "In Torment…". We were all disappointed with that album, I think we worked a lot harder on "Scars Of The Crucifix" and people will be able to tell once they hear it." 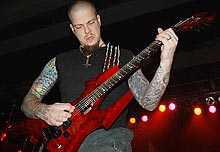 Before we talk more about “Scars Of The Crucifix” I’d like to ask you something about DEICIDE interviews in general. Most of the ones I read during my time as a Metal fan were often very silly and contained almost no information about your music. Are you aware of that yourself? Especially when media people talk to Glen they just fool around and ask him about George W. Bush or his newest scandals, do you agree?
"First of all, when we were on Roadrunner, we didn’t do many interviews. Now that we’re with Earache, we’ve done far more interviews. Most people ask us the same shit and speaking of rumors, I think Glen killed himself this morning. He’s a couple years late (haha)."

Do you see your own opinion represented in Glen’s interview answers? Do you like the way he deals with the media and the public image he creates of DEICIDE? Are you guys really the fucking redneck-rowdys from hell, hahaha!?!?
"I got your redneck right here! I don’t read many interviews."

But let us talk about music now! First I’d like to know what you consider to be the most important musical developments on “Scars…” compared to previous releases? A song like ‘Go Now Your God Is Dead’ with its dissonant riffing is quite experimental for DEICIDE, do you agree?
"Finally, a question about the music… I think it’s the collaborations between Steve, Eric and I. We branched out in different musical arenas. The bottom line is that we are all satisfied with this album and we weren’t rushed to write it. No, I don’t think I like you."

Which song on the new CD do you like best and why? Are there DEICIDE songs that mean much to you, songs you are really proud of?
"I don’t really have a favorite, I like them all. One song that I’m proud of is ‘Sacrificial Suicide’ because I wrote it when I was 15."

What song do you enjoy most when you are standing on stage?
"The song I enjoy playing on stage the most is ‘Deicide’."

How would you summarize your development as a guitar player from your early days on up to now? What has improved, changed? Do you only play Metal or do you like doing Blues, Rock, Country, whatever on your guitar, too?
"I’ve definitely learned some theory over the years. I only play DEICIDE songs on my guitar."

On “Insineratehymn” the brutal and fast elements in your sound suddenly had been reduced, why did you do that? Why did you completely abandon groove on the new album? Is it more fun to go fast?
"Groove??What the fuck?" (Yeah, I think “Insineratehymn” is groovy! – Ed.)

Are you satisfied with the recording process and production of “Scars…”? How was it, working with Neil Kernon after all these years with Scott Burns and then Jim Morris?
"Neil did a great job capturing our guitar sounds and drums. We basically produce the albums ourselves."

Something I think I never read anything about in interviews is the way DEICIDE write new songs. How much and what does each member contribute to an album? After such a long time in the biz it must have been become an almost automatic and well-organized procedure, am I right? Who is the musical “brain” of DEICIDE?
"We each contribute equally to the albums we write and yes after all these years it’s a freight train still rolling! However, I would have to say that Steve is the brain of DEICIDE."

How does it feel to be in the same band as your brother? Does that have any advantages for DEICIDE? Are you jealous of his bigger muscles, haha!?!
"I’m lucky to have my brother in the band and of course it has its advantages. Especially because we’re both guitar players. Now as far as his "big muscles" go – you jerking off to his pictures doesn’t concern me." 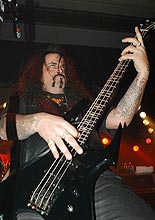 How often and where do you guys rehearse? Do you meet each other often to go out, drink some beers, have fun, whatever, too? Would you call Steve and Glen friends or working partners?
"We rehearse about 4 times a week, sometimes we need time apart. We used to go out and party but now we’re older and more settled. I don’t consider Steve and Glen friends, I consider them brothers."

On VITAL REMAINS’ “Dechristianize” masterpiece Glen does the vocals, what effect had his decision to tour with and sing for VITAL REMAINS on DEICIDE? Do you like the album? Are you interested in doing something with other bands, too?
"Glen was asked to help Tony out on the album. It didn’t effect DEICIDE at all. Yeah, I think the album came out great. Eric and I were talking about doing some sort of insane project. Right now, we’re just exchanging riffs."

In Essen (Zeche Carl), on the tour before, Glen had like another funny, yet violent outbreak which definitely added something to your show, haha. Do you sometimes fear Glen’s losing control? It does not look calculated so I guess that sometimes even you must be surprised of what he is capable, when he had some Whiskey, right?
"Shit like that happens all the time. That was nothing new. There’s a clown in every circus." 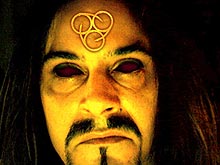 Why do people never grow tired of pissing you off? Maybe DEICIDE have the “provoke me” gene, I don’t know
"I think, most likely it’s because of jealousy. But maybe it’s just stupidity."

Do you listen to a lot of brutal Metal at home or do you prefer other musical styles? What bands could impress you lately? Do you like Black Metal?
"I listen to DESTRUCTION at home. As well as SODOM, KREATOR, VENOM. And as far as Black Metal, I like the new DIMMU BORGIR album."

“Scars…” limited edition contains a DVD and from the excerpt I saw one can see DEICIDE do their hobbies like driving Harley, go shooting etc, what else is on the DVD? Is it like a documentary or something?
"I believe the rest of the DVD is footage of a Las Vegas festival that we did last year."

Alright, that’s it Brian, I won’t torment you any longer, just let me know what happens next with DEICIDE, add some cheers to the people reading this and let me know, if I could come up with some ok questions. Keep up bashing the bible kissers and HORNS UP!!!
"This album is for the fans. I know you’ll enjoy it and you deserve it after the long wait. Your questions were alright but next time please no homosexual comments about my brother. HaHaHa…Cheers."