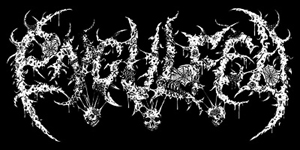 All those of you who already enjoyed Turkish old school Death Metallers BURIAL INVOCATION should definitely make sure to check out their country mates of ENGULFED as well! The band not only features former BURIAL INVOCATION guitar player Mustafa Gürcalioğlu, but also follows a pretty similar brutal musical approach on their recently released debut "Through The Eternal Damnation"… In his review fellow Voices writer Anders Peter Jørgensen already described them pretty well as a combination of dark and brutal American Death Metal with Swedish darkness and atmosphere… Needless to say that we were heavily impressed by "Through The Eternal Damnation" and thus had to find out a bit more about what’s going on in Turkey at the moment, so we contacted Mustafa for the following short interview…

Greetings Mustafa, hope all is going well overthere in Turkey and you’re in a good mood to do some talking about ENGULFED?
"Hailz! Yeah, fortunately everything’s alright around here, there’s nothing to worry about."

I was actually pretty surprised to hear another amazing Death Metal band from Turkey so quick after BURIAL INVOCATION’s impressive debut MCD "Rituals Of The Grotesque"… So, what’s going on in your country at the moment musically? Turkey wasn’t exactly known for brutal Death Metal in the past and I’ve never really noticed any bands of this genre before that gained international attention. So, would you say that there’s probably a real scene growing at the moment or is it just ENGULFED and BURIAL INVOCATION that represent turkish Death Metal?
"Actually, if you had the chance to make a deeper research about the Turkish Metal scene, you would have come across other really quality bands that release their stuff outside of Turkey and really have made a name in the international scene. I can’t say that I’m generally satisfied with the scene here, but there are quite a number of bands with quality releases. The scene isn’t limited to ENGULFED and BURIAL INVOCATION of course, like I said you have to look deeper into the Turkish scene." (it seems so, yeah – Frank)

Any other bands worth a mention maybe, that you can recommend to us?
"I won’t limit myself to Death Metal only and there’s bands like DECAYING PURITY, IMPURATION, DEGGIAL, SAKATAT, GODSLAYING HELLBLAST, DIABOLIZER, DECIMATION which I’d recommend you to check out." 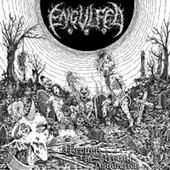 From what I’ve read, you used to be a member of BURIAL INVOCATION yourself and even played on their MCD, but it seems you left them before the recordings of their split EP with Japan’s ANATOMIA… So, when and why did you leave exactly and what made you start up ENGULFED? Musically both bands are not too different from each other, so I suppose it wasn’t musical differences…
"Yeah, I took part in the first release of the band, namely "Rituals Of The Grotesque". After some point, due to the fact that Cihan, the founder of the band and I lived in separate cities, we parted ways. I love playing and creating old school Death Metal, therefore I can say that ENGULFED is in my life after BURIAL."

How did you hook up with Serkan and Aberrant and what kind of musical background bring both to the table? Any bands they’ve played in before?
"Our friendship with Serkan and Aberrant dates back to old times. Actually I’ve played with Serkan in DECAYING PURITY and with Engin in BURIAL INVOCATION. Our musical perspectives are in harmony with each other and we love playing this style of Metal, that’s why we can operate together. I also have another project with Aberrant, DIABOLIZER. He plays in DEGGIAL and IMPURATION as well."

While BURIAL INVOCATION still was a 5-piece act, ENGULFED works as a 3-piece only. Any reasons for that? What kind of advantages / disadvantages does a 3-piece have for you?
"No disadvantages so far, 3-piece is more than enough."

Where do you draw your main musical influences from? Which bands in particular made you start up ENGULFED, which bands were responsible for the style of music you’re playing these days?
"There’s no short answer to this. Anything can influence me, it’s not limited to which bands I’ve been following. There are great bands which have been playing good Death Metal since the early 90s and have influenced me, but as I’ve said before, it’s not limited to that when I create new music."

Did you record any demos before you got together with Hellthrasher Productions or what made them sign you for the release of your amazing debut MCD "Through The Eternal Damnation"?
"This is our first recorded material. After the recordings we got in contact with some labels. Meanwhile Hellthrasher contacted us themselves, telling us they liked our music and wanted to work with us. This sounded reasonable to us and so we’re working together."

With BURIAL INVOCATION you had a deal with Dark Descent Records from the US, while ENGULFED is signed to Hellthrasher Productions from Poland. Both companies have already released some excellent stuff these days, but I was wondering if you can already share any experiences (good or bad), with which company it was easier to work with for you so far and why?
"Dark Descent did a great job for BURIAL. We were really satisfied with the effort they put into us. And when we finished the EP with ENGULFED, we contacted many labels. We had a good relation with Me Saco, and they said they liked our stuff and wanted to release it in 12" format and we aggreed. Meanwhile, Hellthrasher contacted us, telling that they wanted to release this on CD. We didn’t have much info about them, so we were curious about the way they worked. But with time we saw that they are people that work hard, care for the bands on their bill – totally honest and good guys! They worked really hard for promotion. We received many good reviews and we’re totally satisfied with Hellthrasher."

What made you choose a different studio / engineer for the recordings, compared to BURIAL INVOCATION’s MCD? Weren’t you satisfied with the result of "Rituals Of The Grotesque" anymore in retrospect?
"No, we were satisfied with that studio and engineer too. Our preference is just based upon which place and engineer was available at the moment."

Any interesting stories to share from the recording session maybe? Was the engineer familiar with your kind of music already?
"Nothing unusual happened, it was just a regular recording process. The engineer wasn’t really familiar with our style but he easily understood what we needed and thus we got this result."

From what I know, the majority of people in Turkey are Muslims, while other European countries mainly consist of a lot of Christians… When I read your lyrics it seems to me though, that you personally don’t like any religion at all since you deliver pretty Death or Black Metal typical, blasphemic topics. So, what’s your opinion on religion in general (no matter of what kind) and have you already had to face any difficulties because of those type of lyrics in your country for one reason or another?
"Religion means nothing but hatred to me. And no, we haven’t encountered any problems because of our lyrics."

Considering the very small Death Metal scene in Turkey it must be pretty difficult for you to play live… So, how many shows have you already played with ENGULFED in your homecountry so far, with which bands did you share the stage and are there actually many clubs that book Death Metal shows?
"No, it’s not very difficult. Turkey isn’t completely fucked up like Syria, Iran, Iraq or some undeveloped middle eastern country. Whenever we want, without dealing with pansy mainstream shit, we can take part in cool gigs. We played 3 gigs, one of them being with UNDERGANG from Denmark. Just a couple days ago, we played with DEAD CONGREGATION from Greece."

Your logo and cover / booklet artwork looks extremely cool, so how did you hook up with the artist and did he create everything based on your ideas or was it something he came up with completely on his own? Any other bands he already worked with?
"The logo and the artwork was created by David Torturdöd from UNDERGANG. We first met him at Killtown Deathfest at Copenhagen, Denmark. When we started this new band, we asked for his help with the logo and artwork. He did a good job, blending our ideas with those of his own. He also works for other bands and labels and he’s responsible for the visual material of Killtown Deathfest."

Death Metal originally was pure underground music and bands promoted themselves through xeroxed flyers in snail mail letters, features in very small fanzines and liveshows first and foremost. Nowadays it seems to be way more important to have several websites going (Facebook, Myspace, Youtube, Reverbnation etc.) or to spread professionally designed, high glossy printed flyers… How do you judge this evolution and do you think it is more easy or more difficult these days to establish a new band?
"Yeah, before it used be a more down-to-earth Death Metal scene with flyers, letters and fanzines. Yet I don’t know if anoyone would use those if today’s technology was available at that time. Unfortunately you can’t stop things from evolving. The technology developed a great deal, but you can still tell if a band is just about social media poseurdom or about reflecting the spirit of the old days and bringing quality with them. What really matters is long-term listenability instead of visualization."

Ok Mustafa, that’s all for now. If there’s anything else you’d like to tell us, feel free to do so now. No matter what, I wish you and the other guys in ENGULFED all the best and hope to hear some more music from you guys soon!
"Thanks for the interview. Support only the bands with quality!"