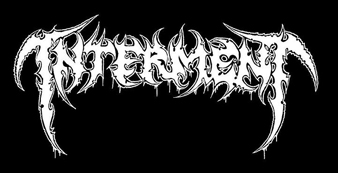 After releasing one of this year’s Death Metal highlights with their second full length entitled “Scent Of The Buried”, the Swedes of INTERMENT underlined that they are a force that’s to be reckoned with. Their second VFTD interview lightens up the crypt that spawned this rotten cadaver of putrid sounds. Vocalist / guitarist Johan Jansson answered all our questions again. Enjoy!


Since this is not your first time with VOICES FROM THE DARKSIDE I think it is best to mainly concentrate on the period from your first record up to now instead of re-telling what already has been told. So to start this interview off, what happened with INTERMENT after the release of your debut “Into The Crypts Of Blasphemy”? I know there have been a lot of split releases as well as some line-up changes. Maybe you can give us some information about that?

"Well, after the release of our first album, that was in August 2010, we did a European tour with URN (Fin) and DIABOLICAL (Swe) in November / December and the following years, 2011 and 2012, we did mostly festivals around Europe. In the beginning of 2013 we recorded five songs that were spread out on three split EPs. About the line-up change, our guitarist John Forsberg left the band in the beginning of 2011, so since then Torbjörn Brynedal, who was live session on the European tour 2010, joined us fulltime. In the beginning of 2013 Martin Schulman decided to leave the band because of lack of time, so after the summer our longtime friend Allan Lundholm joined us on bass and his first gig was on the Wolfthrone Festival in November in Paris. Since then we had been doing a lot of gigs and festivals. The latest tours were with HOBBS ANGEL OF DEATH (Aus) in December last year and in February / March we did a tour with FUNEBRARUM and PUTRISECT, both from the States. In May this year we finally made it to Maryland Deathfest in Baltimore, USA. That was awesome!"

Looking back on it, how do you see your debut nowadays? Do you think it got as much attention and promotion as it deserved? How was the gig situation around that time?
"I think it was a good debut album even that I’m not satisfied with the sound on it. Actually I think it got a lot of attention and promotion. The reviews were better than I thought, so that was great! As I said in the first question, we did a tour in the end of 2010 and a lot of festivals the following years."

What was the reason for concentrating on those “smaller” releases instead of keeping the material and putting it together to a second full length release? 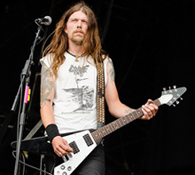 "Because but we got some split offers from bands, so we choose to record and use the songs we had at the time and that was in March 2013. Then we first released the split 12” / CD with BRUTALLY DECEASED (Cze) and then the split 7” with TORMENTED (Swe) and the split 7” with ANATOMIA (Jpn). So after that recording we had to start all over with writing songs for the new album that took two years before we entered Sunlight Studio in June 2015."

When exactly did you start writing the material for “Scent Of The Buried”? Was there any pressure involved or, as mentioned in the first interview, did you still feel to have it in your blood? To me the record definitely sounds like coming from an ever flowing stream (pun intended).
"I don’t remember exactly, but I think the first song was written in the end of 2013. Actually it was the title track ‘Scent Of The Buried’. Of course it’s always a bit of pressure to write a new album because it’s so hard to make original riffs nowadays, but it went really great with contributions from everyone in the band."

Where do the lyrics come from within the INTERMENT camp? Are they of any importance or just something to enhance the music?

"I usually write all the lyrics, but on this album me and Allan have written half of the lyrics. It’s the usual stuff about death and decay, graves, demons, hell, wrath and darkness etc… No, it’s just to enhance the music as you say, or something."

You have worked together with Tomas Skogsberg on your first demo and got in touch with him again this year. How did that happen? I guess he was your number one choice anyway, right?
"No, he was not the first choice from the beginning. We had some others in mind but it was a coincidence that I was visiting Sunlight studio when I did some guest vocals for the Italian band HORRID in 2013. Then we started to talk about to record the next album there because Tomas wanted to record / produce the album that we should have done 1992, and so we did!" 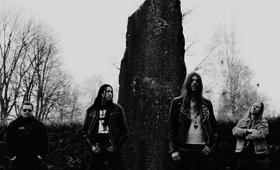 How did the recording process turn out in general and how was it to work with Tomas again after such a long period? Soundwise I guess you didn’t follow the “only analogue is real” trend, am I correct?
"The recording went very well and it was very easy and relaxed to work with Tomas again. We recorded on every weekend in June 2015 and then I did the vocals when we both had time afterwards during the summer. Well, Tomas nowadays works with computers, but still very old school. He uses old programs and is not so updated, but he’s still learning and upgrading slowly. We tried to get it sound as analogue as it could and I think we succeed."

Pulverized Records was again the label of your choice which leads the assumption that you are happy with their work. Was it clear from the beginning to work together again or did you receive some other offers as well that sounded interesting? What is your general opinion on record labels nowadays, are they still needed? 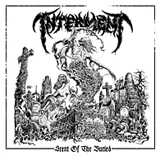 "Yeah, actually we only signed for one album back then but since we got tour support from them in 2010 we agreed when they wanted to release our second album as well. We have a great relationship and they are really supporting us and made great promotion for INTERMENT I think. We did get some offers from other labels after our first album but ‘cause we had one more deal with Pulverised I had to say no. Of course labels are still needed nowadays. I know that the labels don’t have so much money from the record sales because of the downloading and streaming etc., but it’s getting better I think. I try to support underground labels as much as I can with buying directly from them!"

Since the new record has been out since April, what are your thoughts on how it has been received so far? Are you satisfied with the overall outcome?
"Yeah, I’m very satisfied with the response so far. Many people have said that it’s one of the best Death Metal albums 2016 so that’s awesome to hear of course!"

How does the current gig situation look like for INTERMENT? I guess you must be really looking forward to play the Close-Up Cruise in October, am I right? 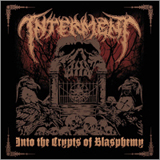 "Well, we have some gigs coming up this autumn and the first one is the Close-Up Cruise at the end of October. Then we are working on a European tour early 2017 and maybe some weekend tours with some cool bands. Hopefully we get to play on more summer festivals next year as well."

How do you generally see the current underground scene? Especially within Death Metal things get more and more mystic, philosophical and over-intellectual. Are there any new bands you really enjoy at the moment?
"I think the underground scene is great and it’s getting huge with so many great bands from all over the world! There are so many new killer Death Metal bands that still have the spirit! At the moment I listen a lot to these awesome bands: CHTHE’ILIST, CADAVERIC FUMES, VOIDSPAWN, NECROT, NECROSIC, RUINOUS, VENEFIXION etc."

When comparing INTERMENT anno 1990 – 1994 to nowadays youngsters, do you think that there is still the same essence and passion to Metal music? Looking back to when INTERMENT started, what exactly was the aim you guys set for yourselves? Was there any aim at all? After 26 years of putrid Metal from the grave, did the band turn into what you wanted it to be? 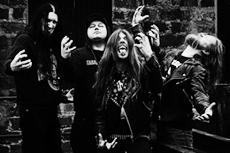 "Hell yeah! I definitively think that it’s the same passion today in the underground Death Metal scene. Of course it’s a bit different but still the same and even bigger! Well, I think our aim in the beginning was just to play Death Metal and try to get some gigs and find a label to release our stuff. Today we have achieved those goals and I’m satisfied with everything we do with INTERMENT. Only Death Metal is real…"

To finish this up I’d like to say thank you for taking your time. If there’s anything you’d like to add, feel free to do so.
"Thanks a lot for the interview! For news, updates and upcoming gigs / festivals please check our websites. Support the Death Metal underground and stay drunk!! Prost! Johan, INTERMENT."