These guys won’t need no further introduction, so go ahead and read the interview with Tyrant or fuck off!


"Servants Of Darkness" is the first NIFELHEIM album for Black Sun Records, so I suppose your deal with Necropolis was either finished or not completely satisfying for you any longer… Were there any other labels interested in the band as well? Tell us all details about these subjects!
"Well, we are luckily not to be on Necropolis anymore, the reasons are many. First of all they are all idiots! They don’t give anyone their money, they talk a lot of shit behind people’s backs and so on and on… So, we decided to release our new album on Black Sun for the reasons that they are situated in the same city as us so it is easy to have proper contact with the label which gives us the opportunity to have some more impact on what’s happening, just to try out the opposite to Necropolis. They also gave us a good deal with minimal chances to fool us. There were of course some other labels that were interested even though we didn’t seek any deal seriously at all. But I think more or less we wanted to test with Black Sun from the beginning. It still seems totally ok."

It seems that your longtime drummer Demon didn’t work out for you anymore, or why did you replace him? Please introduce your newest member!
"Demon has always caused a bit of trouble for the band. He still lives in the village he was born, and after many years we have understood that he will never do anything real for NIFELHEIM, so we replaced him with Devastator who is a great drum talent and fits perfectly into NIFELHEIM as a person as well which has always been our biggest problem with finding members. So we are very satisfied."

Where do you see the main differences (improvements) between the new album and your previous one "Devil’s Force"? Have you changed studios for the production or something?
"They are both recorded in the same studio but anyway the main differences must be the production that we wanted a bit clearer this time. "Devil’s Force" has got a very uncommercial sound (you could say it’s our answer to SODOM’s "Obsessed By Cruelty") but I think that our newest production is both better and rawer than "Devil’s Force". Musicwise the new album is more "forward" and primitive and at the same time more "atmospheric" than our previous releases which is very hard to achieve."

Your songtitles are always full of old metal cliches, which is fine with me, but don’t you think that some people might easily add NIFELHEIM to this stupid retro movement because of that?
"There may be some metal cliches but you have to think about the meaning of the titles and lyrics which is EVIL!! We will not let any false bands stop us doing real lyrics! NIFELHEIM have always been independent from what others are doing." 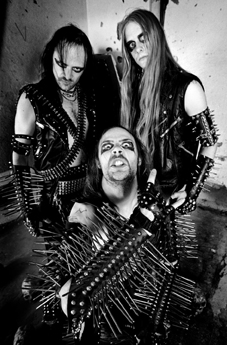 Is there actually any band out of that genre you like?
"No!"

By now it should be known to many that you’re really possessed IRON MAIDEN fans, so how did you like their "comeback" album?
"The album is fucking brilliant!!! But I definitely don’t see it as a "comeback" album, I think it sounds like a normal continuation from "Virtual XI". To me MAIDEN have always been the same. The greatest!!!"

Did you ever play any MAIDEN songs with NIFELHEIM during your rehearsals?
"It has happened but anytime when we manage to put together a rehearsal we mainly concentrate on NIFELHEIM’s songs."

By being such big MAIDEN fans I always wondered why you didn’t start a band in that style back when you founded NIFELHEIM?
"We had the good taste to understand that we couldn’t do anything like MAIDEN (nobody can!) and we also thought that the music we now are playing was much more needed, and I have always liked (real) black metal a lot as well."

Have you never been asked to contribute a song to one of the many IRON MAIDEN tributes around? Which song would be your number one choice for something like that?
"We don’t want to be on any of those MAIDEN tributes because there is no bands that can do a MAIDEN song as great as MAIDEN! Especially not any Death / Black metal band, it’s just pathetic. Of course we could do it better than all those other bands that I have heard doing MAIDEN covers but we will never be good enough to be satisfied ourselves. I mean if you shall do a cover like that you have to have as great voice as Bruce Dickinson to start with. And I doubt there is anyone who has."

Talking of tributes – your contribution to the BATHORY tribute "In Conspiracy With Satan" was pretty unusual – instead of going for a classic track of them, you decided to cover an obscure old demotune that never ever made it onto an official BATHORY album… What made you choose this particular track?
"It was just that we liked that song and many others were already taken by other bands."

You have also recorded a track for a MOTÖRHEAD tribute which I unfortunately didn’t manage to get my hands on yet. So, could you tell us a bit more about that maybe, like which label is putting it out, which other bands appear on it, if you once again chose a totally unknown track and so on?!
"I actually know very little about this one. Anyhow it’s not out yet (if it is we are not on it anyway). The song we recorded is "Sacrifice" which I think is a more odd choice than "Die In Fire" for the BATHORY tribute but anyway the reason why we took this one is, among others, that we wanted to do a pretty new song to make a tribute to the now existing MOTÖRHEAD and not only the old stuff they did. The rest I can say about this tribute is that it will be released by Remedy Records." 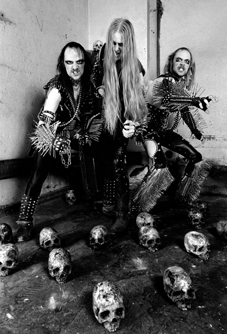 And what exactly is this "Gummo" movie all about? How the hell did you manage to end up on the soundtrack for it? By the way, which NIFELHEIM track did you contribute?
"There was someone from New York called Spider or something that wanted the worst bands for this soundtrack, so we recorded two tracks, "Hellish Blasphemy" and "Demonic Evil" but only "Hellish Blasphemy" came on the soundtrack. Unfortunately we weren’t pleased with that recording but it’s better than nothing I guess. Also Necropolis had something to do with this one, that’s maybe why we haven’t got any money for it."

In the meantime you also appeared on some 7" EP’s – first of all there was the second part of the rather cool "Headbangers Against Disco" series (where you contributed a VULCANO cover), but then there’s also two others, entitled "Sacrifice To The Lord Of Darkness" and "Unholy Death"… I suppose the latter one is simply your old demo pressed onto vinyl, but what about this "Sacrifice…" one? Tell us more about the intention behind that and which songs appear on it?
"This one is delayed and not out yet either. Anyway It is the last recording with Demon on drums so it was actually recorded before "Servants Of Darkness" .The songs are "Sacrifice To The Lord Of Darkness" and "Earwigs In Your Veins" (by Treblinka) it will be released by Madhouse records and the cover painting is made by a mad maniac that we are friends with. The "Unholy Death" 7" is like our ten years anniversary with some of our oldest songs. It’s released in a unholy limited edition, all EP’s covered in real blood and buried before we sell them."

In the press you’re often named the "NIFELHEIM twins"… Are you really twins or did that just come up because you look pretty similar?
"We are real twins."

You seem to have a constantly growing underground following, even though you haven’t toured at all yet, don’t do as many interviews as other bands and most important of all – your musical style is uncommercial as fuck! So, how do you explain the success of NIFELHEIM?
"Good question. I don’t know. maybe because we are better than all others in our league."

But there’s been talk recently that you will finally hit the road for the new album, so what can we expect from a NIFELHEIM liveshow?
"You will never know when we will hit the road but await with fear for your final day when we come to blow you to pieces."

Will you be joined by a session guitarist or was your material written for one guitar only anyway?
"Our material is written for two guitars so we need two guitarists we have tested a new one recently so it’s only one missing before we have a full line up that can play live."

Anything else you’d like to mention?
"Fuck you all very much!"