"Metal is Death, Death is Metal, NUNSLAUGHTER Death Metal"! Does it sound familiar? Of course it does, because even if you aren’t up to date with the current Death Metal scene, but you know there is something more out there except the few major bands you see in major magazines again and again, then most probably you know or at least heard about NUNSLAUGHTER. Why? Because without a doubt they are the most active Death Metal band that ever walked the earth. Don Of The Dead and his crew just released a brand new studio album – what doesn’t happen that often in their case – so it was a good occasion to ask him a few questions…


Don, so when exactly are you sending your application to the Guiness’ organization, to make sure you are landing on pages of their book, as the most hard working and active band?
"That will not be happening any time soon. We are not anywhere near that status but thank you for noticing."

Seriously now, only in 2014, you had 11 new releases. Was / is this kind of strategy planned, or does it come out naturally, you do not plan anything, and you are happy to welcome offers from all over the world?
"I don’t really plan that many releases but it just happens to work out that way. I like to work with many different labels all over the world and some work fast to put out releases and some work very very slow. We try not spread it out over the entire year. I personally don’t think we have that many releases for an entire year."

Between 1987 and 1998 NUNSLAUGHTER wasn’t that active, you had just 9 releases, while from 1999 we have a few, if not over a dozen of new releases each year. What had changed back then? Your attitude or vision of the band?
"That was a time when we were still in high school and then into the army and off to college. Band members got married, had kids, got divorced, changed jobs, moved away etc. etc. As a young person all of these things affect how a band can continue and move forward. We existed before everyone had email and were internet savvy. Everything took much longer and was much more difficult to coordinate. I have never had a vision for the band I just did music for music’s sake." 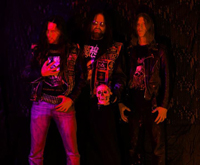 One of those new releases is the brand new studio album, titled "Angelic Dread". The previous one, "Hex", came out in 2007. Why didn’t you want to release a new album in the meantime, and instead you again did tons of EP, split and live releases?
"I do not like full length albums and I wanted the band to focus on creating more relationships with bands from all over the world. We are not autonomous and being able to share some vinyl with another band is important to me."

"Angelic Dread" is available as double disc, with re-recordings of various tracks taken from the EP and single releases. Why did you decide to re-record these songs, instead of using original versions?
"The original recordings are being released through a compilation called “The Devils Conjuries". We did not set out to have this as a double CD it just happened that way. We began doing the re-recordings as a way to let people that did not collect the very limited run vinyl recordings. We finished the re-recordings and they sat for a bit. In the mean time we also wrote an entire album. During the production both albums were finished about the same time and rather than split them into two separate releases I decided to have one double CD. This way people that are coming to see us will have the ability to acquire some of the songs we do live on our new CD. It has worked out very well." 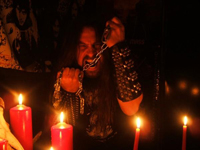 That’s right. If we would put all those EP releases aside, do you think we can say that "Angelic Dread" continue the style of "Hex" and your previous albums, or you would say it’s something new for the band?
"The album contains all newly written songs where as our previous releases have songs that we made demo recordings of long ago. It has continued in our style of music and writing. I would not want to try and do something different at this stage of the band."

The artwork of this new album can be placed in one line with the "Hex" artwork – I believe it’s not an accident?
"I liked the look and feel for the "Hex" artwork and the artist was kind enough to want to work with NUNSLAUGHTER again. His macabre photos fall right in line with what I was trying to convey with this album." 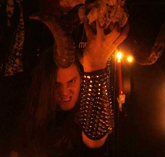 Basically how important are the artworks for you? With so many releases it’s quite hard to control their quality as there is no budget in each case, right?
"It is important for bands to pick the right art for them as a band. We have not always been able to do so or been able to afford to do so but in recent years we have taken more time to pick and choose what we want. Sometimes we fail but such is life."

Will we have to wait another 7 years for the next album with new material?
"Most likely if we do another full length album it will be many years before we get around to recording it."

On "Hex" all guitar and bass guitar tracks were recorded by Reaper, while on the new one we hear Zack Massacre, better know as Zack Rose, who is also a member of NEKROFILTH. How did he join the band, and why did Reaper leave, if it’s not a secret?
"Zack was in that band even as far back as "Hex" we just did not have him on that record because he was not there when the music was written. They both played in CRUCIFIED MORTALS together. Reaper left for his own reasons. I do not know what they were."

NUNSLAUGHTER had more than 20 different members over the years. Does it mean you are a person that is hard to work with, or you rather quickly say thank you to persons who don’t share your vision of the band?
"I may be demanding but I do not make outlandish demands. Showing up on time for practice and knowing how to play the songs are two sticking points for me. Don’t be a douche is another." 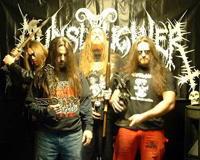 It’s not a big secret, that you are a die hard Metal fan. If you would need to mention 5 bands or musicians that had the biggest influence on you, who would they be?
"KISS, BLACK SABBATH, HELLHAMMER, BATHORY and VENOM."

Did you ever think about a Heavy Metal side project? Or at least an album, where you play Heavy Metal classics with NUNSLAUGHTER?
"No, I have not considered it." 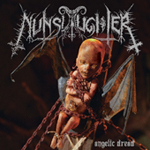 But you did two releases with TONDRA, what was the point of having a side project where you also played Death Metal?
"I did not think of TONDRA as a Death Metal project. It was slow and more doom filled than anything else in the past that I have worked on. I hope to return to that project someday."

2014. How would you comment the condition of the Death Metal scene? Some personal favorites?
"Tainted by technology. I enjoy very little if anything of modern Death Metal."

And do you think it was a good year for NUNSLAUGHTER? What have you scheduled for 2015 so far?
"It will be a great year for me. Not sure how it will work out for the band. We have 10 releases planned for 2015 but we will not be touring or playing any shows."

Thank you for this chat Don, it was a pleasure!
"See you in HELL!"