This short interview has also been published in Sleepless Magazine No. 9 before but since not that much has happened within the last couple of weeks, it’s still rather up-to-date. In the meantime all of you should have bought their godly debut album “Rides The Moonstorm”, which is to my opinion one of the best Death Metal albums that ever emerged from the mighty Netherlands. They also recently released a split 10″ with their buddies DESASTER, they have a new drummer, so there were more than enough reasons to pass the word on to Wannes once more 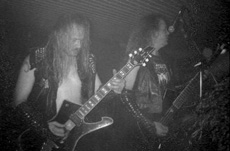 You recently told me that there will be quite some new PENTACLE releases coming out. Why don’t you tell a bit more about that?
“Yeah, we recorded a cover of POSSESSED already quite a while ago for a POSSESSED tribute album. Since it takes that long before the POSSESSED tribute album will finally be released and since we got an offer from To The Death Records to release our cover as a 7″ we decided to do that. So, our POSSESSED cover will be released as a split 7″ together with REPUGNANT, a band we all also really appreciate. REPUGNANT will record an OBSCURITY cover for that 7″. Furthermore we also released our split 10″ not to long ago with our buddies of DESASTER. That 10″ looks really good, I’m very happy with it, and I think it will be sold out real soon. We covered DESASTER’s ‘In A Winter Battle’ and totally PENTACLised it (laughs), I’m very proud of that version. We really checked that song out to see what we could do with it, and when you listen to it, it could also be a new PENTACLE song. DESASTER covered our ‘A Serpent In Blood Red’, their version is a bit shorter than ours, and it turned out also really good. Both bands got a good production, we recorded our tracks again at Harrow Productions what you already could have expected, also DESASTER has a very fat sound. That 10″ is available as a picture disc limited to 100 copies, in pink vinyl (333 copies) and also black vinyl (100 copies). You can order the picture discs only through the label, Iron Pegasus, the other versions can you probably buy at gigs of ours or DESASTER or in certain mailorders.”

Most of the people out there will probably know that Marc, your drummer, also left the band. You have a new drummer now, Robert…
“Yeah, there were several people who did an audition. If someone comes over to audition as a drummer you always have to wait and see how things will turn out, as it’s totally different than the audition of a guitarist or something. Of course not everything went completely without mistakes the first time, but the songs that he had practiced went really well. He’s already a bit older, he’s 38 years old, but I really think that he has all the capacities he needs to complete PENTACLE again. He’s not exactly what you call the die-hard Metal-head but he knows more than enough of this kind of music and he’s very enthusiastic about PENTACLE which is of course very important. He has been listening for about 7-8 years to Metal so far and he knows stuff like MORBID ANGEL, EMPEROR and DISSECTION but I don’t think he’s that wellknown with bands like for example TREBLINKA or NECROVORE. I recorded a few tapes for him with stuff that we all like to listen to very much and he was very enthusiastic. He’s willing to work hard for it, he’s willing to sacrifice a lot for it and really loves to play gigs, which is of course a good thing.” 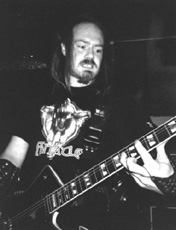 Have you also worked on new songs in the meantime?
“Yeah, we’ve been very busy with writing new songs as we would like to release something to celebrate our 10 year anniversary with a mini-CD or something. We’ve written three new tracks, 1 is completely finished, on the other 2 we still have to work a bit. We also still have some other stuff lying around, at the moment we actually have too many ideas to release just a mini-CD. It’s a pity that you have a sort of limited time as we also would really like to record 2 DEATH covers: ‘Legion Of Doom’, which is in fact an old MANTAS song and ‘Witch Of Hell’, which is a track of the ‘Reign Of Terror’ demo. We already rehearsed those tracks and we can play it, so I thought it was a real pity that they hadn’t asked us to play on these benefit festivals that were organized for Chuck here in the Netherlands lately, that would have been fun. It’s the intention that these recordings will be released as a set of two 7″ singles, so we have to keep the running time in mind. We really plan to release something really brutal. This new song that we’re working on sounds very primitive but very PENTACLE at the same time. It really totally rips and shreds, I can guarantee you that (laughs). PENTACLE has been a band that is always looking for aggression but I feel that we’re even taking it a step higher with this one.”

During a soundcheck at one of your gigs lately, I heard you also play a DESTRUCTION cover. Have you never thought about recording that track as well?
“We thought about it, but we already have 2 DEATH covers and we don’t want to be known as a cover band as we already recorded PENTAGRAM, DESASTER and HELLHAMMER songs before. Those DEATH covers is something that I wanted to do for already such a long time as I totally worship the old DEATH demos. DESTRUCTION, well, it could be fun but there are already so many bands out there who are doing it these days and ‘flirt’ with these German eighties bands like KREATOR, DESTRUCTION and SODOM. Although I can imagine that people out there know that’s coming straight from the heart, I think it’s better to drop that idea. We also play ‘Into The Crypts Of Rays’ of CELTIC FROST sometimes at live gigs, we could record that song as well, but CELTIC FROST also has been covered so much lately that it’s maybe more fun to cover something that people are not that familiar with.”

How do you look back now on “Rides The Moonstorm”?
“I’m still very proud of it. It’s a release that I’ve worked really hard for, we played many gigs to support the album, and I still love to listen to it. Many people were very happy with it and also like to listen to it. We set a certain standard for ourselves with that album, and I think that for us, it will be difficult to top it. I think the vinyl version looks excellent, it’s still one of my ‘jewels’ in my own collection. I was a bit disappointed sales-wise because it didn’t sell that well. It got excellent reviews everywhere, and Damnation Records really put a lot of effort concerning advertisements and all that in it, but nevertheless we just sold around 2000 copies totally and that was that. I really feel a bit pity for Damnation Records because the sales numbers are important for a label. I really have no idea why it didn’t sell better as the reactions were over-all really good. I’ve told you this before and I think I’m still right if I say that despite the reviews and the reactions, we still play music for a very selected audience. I also would have preferred if it would have sold like 10.000 copies, but unfortunately it didn’t happen. What’s the cause, I really couldn’t say. ”

Interview: Steven Willems
Live Pics (except for the single shot of Mike): Hacker