The Dutch band PENTACLE is an important part of the Death Metal underground scene for already more than ten years. Therefore, every reader of good old Voices will probably be familiar with this great band. The last couple of months, it was pretty silent in the camp of PENTACLE, a silence which is now broken with their second full-length longplayer “Under The Black Cross”. Vocalist / bassplayer Wannes Gubbels talked with a lot of enthusiasm about their latest creation


You have a second guitarplayer in your line-up for already quite a while now, Alex, the brother of your other guitarplayer Mike. When did you get the idea to continue as a foursome, keeping in mind that you were already a foursome previously around the time of “The Fifth Moon” when Edwin (ex – GODDESS OF DESIRE) was in the band?
“When we were working on the new songs, it became pretty clear that we would need an extra guitarist in order to take us to a higher level. Despite the fact that we’re an oldschool Death Metal band, progression is also important for us. We still totally stand behind our older releases and we’re still very satisfied with them but the new album simply had to be better and it would have to be a step forward. Alex was a very logical choice as he knows the band already since 1989. He grew up with all the metal classics (MERCYFUL FATE, POSSESSED, CELTIC FROST, SLAUGHTER…) and he’s also a good guitarist. Alex played some rehearsals together with us and it all just clicked right away. The PENTACLE gig in Luzern (Switzerland) together with DESASTER was his debut, from that moment on he was a permanent bandmember and he’s just doing fine.” 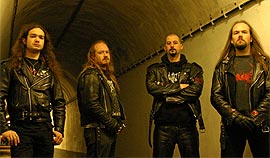 Personally, I think that "Under The Black Cross" is like a very logical follow-up to your older material, nevertheless it sounds a lot more aggressive and without any compromise. What’s your personal view?
“I totally agree with you. Personally, I see “Under The Black Cross” as a really honest oldschool Death Metal album in the typical PENTACLE – style, maybe even more than our previous albums. This record really has all the elements which such an album should have. “Under The Black Cross” sounds honest, raw and dark! I’m very satisfied with the album which is definitely a good feeling after all the hard work we’ve put into it.”

"Under The Black Cross" is a sort of concept album which lyrically describes the events which happened on the 26 – 28th March 1942 when the English tried to eliminate the German ship Tirpitz, a strike which is known in the history books as ‘Operation Chariot’. Why do these events fascinate you so much that you even ‘dedicate’ a complete album to it?
“Well, to be honest, the main goal of the operation was to eliminate the dock where the Tirpitz – in case of damage – eventually could be repaired. Those events already impressed me from when I was a child. The whole story appealed to me because of the different elements in it… courage, knowledge, guts… Such commando-actions have always interested me and this was an operation which is just out of range. When I was looking for a theme for the album, I came up with the whole ‘Operation Chariot’ concept rather fast. It wasn’t easy to put all the information I had found into seven songs but I’m pretty convinced that I did justice to what really happened. It was a very interesting experience which may continue in the future.”

On your previous album "Ancient Death", you invited Keith of DESTROYER 666 as a guest vocalist. This time, you worked together with Chuck Keller (ex – ORDER FROM CHAOS) on the really outstanding track ‘(Storming Through) A Hail Of Steel’…
“That’s right, I had the idea rather spontaneously. I know Chuck for already quite some years and I still have a good contact with him. One night I was writing an e-mail to Chuck when I suddenly got the idea to propose to him if he would like to write a PENTACLE – song, his interpretation of our music so to speak. He was very enthusiastic and he started working on it immediately. A bit later, I received a tape with his ideas and some comments and explanations. As a band, we worked out his ideas and that’s how ‘(Storming Though) A Hail Of Steel’ came together. It sounds of course a little different than our own material but I think it gives the new record just more variety.” 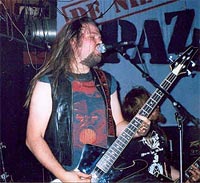 What are the concrete futureplans of the band?
”There are quite some new releases of ours coming up, first of all the (gatefold) LP-version of “Under The Black Cross”. We’ve also recorded two new tracks for an EP which will be called “Archaic Undead Fury” and which will be released by the American label Metal War Productions. An especially for this EP designed poster will be inserted in the artwork of the EP. And we’ve also recorded the song ‘Divus De Mortuus’ for a NECROVORE – tribute album which will be released by From Beyond Records. And furthermore, there are of course all the necessary gigs to promote the new record.”

To come to the end: you’re known in the scene as one of the biggest CELTIC FROST worshippers around. Every now and then, you can read updates on the internet concerning the new CELTIC FROST album. What are your expectations?
“I follow the whole thing very close, I visit the official CELTIC FROST webite each day. It all sounds very exciting but I’ll wait until I hear the new record myself because it’s only then when I can really judge about the music. My expectations are on one hand not that high (that way I also won’t be disappointed), but of course you never know… All the news I’m reading all the time make me really wondering about it. Because they are and still remain my old heroes and it would of course be awesome if they would make a fantastic album. I really hope so!”