At the NO MERCY festival tour I already interviewed SINISTER’s Alex (bass) but was stupid enough to forget to record that, so now with the new release "Creative Killings" I took the opportunity to send some questions via email. Both Alex and new singer Rachel answered those questions, so there is even an improvement and this time Alex even came up with a story for you. They didn’t answer everything, so I guess those questions were stupid (?) and therefore I left them out… enough of that blabla, let’s leave the talking to Alex and Rachel.


When and how did you get hooked to Heavy Metal and Death Metal? Do you remember your first Metal record and your first Metal concert? Which was it? Do you still listen to those bands?
Alex: “My first Metal album was "Number Of The Beast" from IRON MAIDEN. I was 11 years old at that time. I saw them a couple of years later in 1989 (when I was 14). It was my first Metal concert. I stopped following MAIDEN after "Fear Of The Dark" because the albums after that one were horrible.”

Do you remember if there was a certain moment in your life to make you start playing music (singing?) Did you play different instruments before? (e.g.: some bands I interviewed admitted that their parents forced them to learn the piano)
Alex: “I started making music when I was around 15. I sang in a couple of bands and my first effort on bass / guitar was in 1994. Three years later I joined SINISTER.”

Leaving out all the other changes in the line-up: what exactly led to Rachel joining SINISTER on vocals? You knew each other before, right?
Alex: “We knew Rachel already, because we did a lot of gigs with her in the past with her former band. After some auditions which didn’t work out we decided to ask Rachel because we thought that her voice would really fit in the SINISTER sound.” 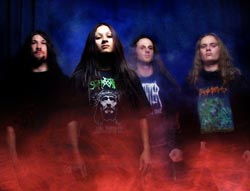 Rachel, what were your thoughts when they asked you if you would join SINISTER? A dream come true? Worried about the challenge? Are you still with OCCULT? If yes, aren’t you afraid your schedules might collide?
Rachel: “Yes, it’s a absolutely dream to be a member of such a great band as SINISTER. I’m not a member of OCCULT anymore because I couldn’t find time to do them both.”

What is your favourite SINISTER album and why?
Rachel: “I like "Hate" because of the dark atmosphere on that album. I like the new one as well. So I think these two albums are my favourite.“

Was the gig in Osnabrück at the No Mercy tour the first official gig with SINISTER for you, Rachel? How were the crowds‘ reactions to Rachel on that tour? I was amazed SINISTER had to play that early, so there were not that many fans around…
Rachel: “Yes, it was my first gig with SINISTER and I was very nervous because people expect a lot from the SINISTER frontman. So, I was pretty pleased that we went on stage that early.”
Alex: “The reason why we played that early is also because we haven’t done anything the last three years and we played without a new album. It didn’t really matter though because besides Osnabrück every venue was packed when we entered the stage.”

What’s the song writing process like when you’re writing a SINISTER song? Did Rachel already contribute to "Creative Killings"?


Rachel: “No, I didn’t contribute anything for the songs. Bart and Aad are responsible for the music while Alex takes care of the lyrics.”
Who’s responsible for the lyrics on "Creative Killings"? What inspired you and can you write a short comment on each song?
Alex: “I wrote all the lyrics for "Creative Killings". "Creative Killings" is a theme album. Every song title deals with a different motivation why someone is able to kill and murder a person. For example: ‘Reviving The Dead’ is a song written from a political view while ‘Judicious Murder’ is written from another point of view; lust and law.” 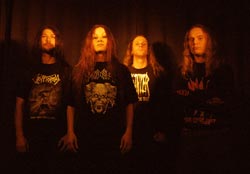 Can you comment on the following 3 aspects in the life of a musician – what do you like about them, what don’t you like and why: a) writing songs b) recording them c) playing live


Alex: “a) a hard process b) interesting but stressfull c) the best thing of being in a band”

To me the vocals on "Hate" are among the best in the history of Death Metal, so at first I had a hard time getting used to Rachel’s style but there is so much passion in your voice I can only think of two words: it’s either frightening or simply great! Where do you draw all that energy from? Both technically and mentally. Do you read a certain type of books or watch horror movies or do you simply listen to Death Metal a lot? Where does all this aggression come from? A bad childhood? ; -)


Rachel: “Well, I’m already singing for over 12 years. So in that period of time I worked on technique as well on endurance. I have grown over the years and have become better and better. My work on "Creative Killings" is the best I have ever done.”

How did you come up with the idea to cover ‘Storm In My Mind’? Were there any other songs you had in mind as as a possibility?
Alex: “We recorded the songs for a tribute album in ’99. But through unknown reasons the tribute was never released. We decided to put the cover on the new album. We used the drum tracks from ’99 and we decided to re-record the bass, guitars and the vocals, to give it the same vibe as the rest of "Creative Killings".”

I heard you were not dropped by Nuclear Blast. So why did you leave them for the smaller label Hammerheart? Getting rid off a commercial label, back to the roots of the underground? Do you think the underground fans will appreciate it? Do you think this move will make you sell more or less copies of "Creative Killings"? Did you ever think of starting your own label? There are quite a few bands doing that at the moment… 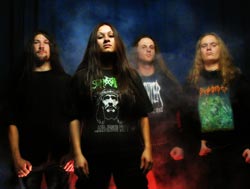 Alex: “We are to lazy to manage our own label, haha! The reason why we left NB is simple. We just wanted a change after ten years being on the same label. We also believe that the promotion and support will be better with Hammerheart since we are a priority for them. With NB you are just one of a lot of bands.”

How do you like the reissues Nuclear Blast are releasing now? Were you always treated fairly by them and do you think you’ll get some money out of that?
Alex: “We have no complains towards NB. They have always treated us fairly and it was a hard decision to leave them. I just saw the reissues and I think it’s a cool item for the people who don’t have one of those albums. Of course they will get some money out of it, but I doubt if it will be a lot.”

Is there a good underground scene in your area? Very recently I came across a couple of promising Dutch bands like PYAEMIA or NECROLOGY, for example. Do you keep an eye on the underground or did you lose track over the years? Any unknown band you can recommend?
Alex: “Yes, I like PYAEMIA as well! I still see a lot of bands and I have to admit that a lot of them are really good.”

Do you still have unfulfilled dreams you’re actually working on? Like one day being big enough with SINISTER to live from the band? (I guess you can’t right now, correct me if I’m wrong) Or touring with a special band, meeting a special person, etc.?
Alex: “No, I stopped dreaming about those things when I was 16. Music is for me, having fun and doing something useful with my spare time.”

Finally, can you tell our readers a funny or interesting story that happened to you with SINISTER (or OCCULT)? Maybe from your life on the road? There is always something happening on the road (yeah, I know most of the time it’s hanging around waiting for the gig but you’ve been around so long there must have been something, take your time, we’re not in a great hurry)…
Alex: “Our roadie took a shit in the tourbus on the No Mercy fest. What he didn’t know was, that it was a toilet for liquids only. He flushed his shit with some piss and a newspaper. The bus driver was very angry because he was the one that had to clean things up.”

Any last words? Or anything no journalist ever asked you but you would like to talk about?
Alex: “Hopefully we will see all the crazy people from Spain soon. In 2002 we gonna release a DVD / Video and a cover CD. For the true SINISTER fans.”