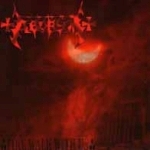 Sophomore release for this bunch of Italian maniacs from the Rome area, “Fire Walk With Us” is again a fine slab of tortured and very modern Black Metal. Nothing has changed really in the ABORYM camp since their first album “Kali Yuga Bizarre” (1999), except that legendary vocalist Attila Csihar (TORMENTOR / MAYHEM) handles all the vocal duties this time after the departure of main vocalist Yorga S. M. So I suppose if you love the first album you should go for this one too, because the formula has remained the same: an expert mixture of Black Metal (fortunately not too much), industrial noises, techno “music” (check the track ‘Here Is No God S.T.A.’), and electronic sonic outbursts. I am not usually a fan of this genre of too modern aggression, but I make an exception for ABORYM, simply because the band has a lot to offer and comes up with interesting ideas, be it on their first or on this one. Each of the songs distillates a sinister feeling and drones menacingly in the mind, and you can’t deny ABORYM a strong sense of originality (like it is often the case with underground Italian acts, they have a special talent for this thing) fortunately completed by a concern for maximum brutality. Very well produced, “Fire Walk With Us” reveals itself captivating to hear, except maybe for the filler “track” ‘Theta Paranoia’, a simple loop repeated again and again, a much too cheap way to close an otherwise class album. Note that the band pay their tribute to the evilest Norwegian scene by covering ‘Det Som En Gang Var’ by the infamous BURZUM, add to this a very convincing performance by Attila and you obtain a really good Black Metal album with an avant-garde touch. It is well known that the most extreme fringe of the Black Metal bands are involved in other scene like the techno and ambient ones, and ABORYM stay true to this sort of now firmly established tradition. But “Fire Walk With Us” remains before all a Metal album, and a fine one if you ask me. Certainly one of my five favorite acts in the Black Metal field, and certainly a worthwhile acquisition for your records collection. Note that I review here the American release, this album being already available in Europe in digi format through Scarlet records. Anyway, wherever you are on this doomed planet, buy!