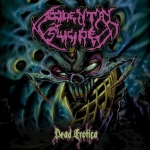 ACCIDENTAL SUICIDE are one of those bands from the early nineties that never went very far. Hailing from the USA, they recorded two demos and a full length album between 1989 and 1992, an EP the following year that ended up not being released, and that was it. Now this compilation brings to the surface both demos and the unreleased EP. The first four tracks are from the aborted "Erotic Dead" and are very good. The production is fine and powerful, and we are treated with a surprisingly complex Death / Doom Metal. A strong point is that it doesn’t sound very close to any other band I can think of. Not only are they clearly striving to have a sound as individual as possible without departing from the genre, they are quite experimental, doing unexpected variations and going into melodic subterfuges that much enhance the outstanding quality of their music. Often you will be surprised by the twists and turns of the songs, and I was as much reminded of the dragged Death Metal of AUTOPSY as of the very early melodic explorations of bands such as DARK TRANQUILLITY. This is why those early Death Metal times were so exciting. There was much still undefined, there was room to go to new places, and the fact that these young bands were full of stamina, will and ability lead to the creation of real gems left forgotten in an age gone by. Many bands of the time were testing and trying the boundaries, and many 7" EPs were sometimes astounding pieces of innovation, by bands such as ADRAMELECH, THORMENTHOR, HOUSE OF USHER and so many others. So it’s definitely a compliment from my part to be mentioning all of this in ACCIDENTAL SUICIDE’s review. I particularly enjoyed ‘Piss’, and also ‘God Just Let Me Die’, but truth is all of the EP is very strong! On to ‘Flesh Parade’, the 1990 demo, in which the sound quality plummets, as expected. Still very heavy and bassy, but much rawer and less balanced. These three tracks would later be included in their full length (that included much faster songs) in improved versions, whereas here they do sound very demo-like. This is more typical Death / Doom than their later ventures, aggressive, usually slow but sometimes picking up speed, and already showing the effort to break the mould a bit. In fact, it should be noted how early they were practising this style of doomy music, nearly at the very beginning of the genre, although they did already have some bands they could call for influence, such as their countrymen WINTER. And indeed, the last six tracks, from their 1989 demo "Sadistic Intentions" are much faster-paced, more usual mid-tempo Death Metal with somewhat thrashy vocals and a very raw production. The guitars sound as if recorded inside a metal bin and so on, but you can hear everything acceptably, including the occasional clumsy solo. Often you can hear instrumental nods to SLAYER. It’s certainly obvious this was a band in its beginning, but it’s still a commendable demo. Some cool material to be heard, such as the ‘Accidental Suicide’ track, perhaps the best in the demo. So all things considered, I certainly recommend yet another piece of recovered history to all you early Death Metal fanatics out there. Mainly the unreleased EP is very much worth listening to. To know more, check out www.facebook.com/accidentalsuicide, label contact: www.vicrecords.com