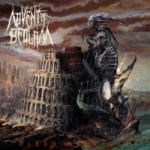 This isn’t a terrible album. Indeed, one may say it’s not even close to terrible. There are good riffs, capable rhythms, and decent enough vocals. However it doesn’t quite come across as convincing. Instead what you have is a mish-mash of influences pieced together in a collage. The arrangement is reflected in the artwork, which looks like the creature on the censored version of CANNIBAL CORPSE’s “Bloodthirst” album, and COMECON’s “Converging Conspiracies” album. On top of that the band’s logo looks eerily like a Deathcore band’s design. But these are superficial criticisms. The music is fine, just average, run-of-the-mill displays of musicianship. I am not saying this isn’t good, but I am saying it’s far from noteworthy. Still, it’s enjoyable enough. Songs such as ‘Tryannicide’ and ‘Nimrod’s Rebellion’ contain good riffs and some dark and desolate parts. However, some of the songs, again such as ‘Tryannicide’ have in them annoying parts as well, inspired most likely by Black Metal but unfortunately it comes across as whiny, Deathcore-ish self pity. A pretty stale affair of an album, though one man’s trash, as they say, is another man’s treasure. Don’t write them off on my account, but don’t hold your breath, either. www.adventofbedlam.com, www.facebook.com/adventofbedlam