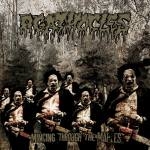 In the year 2015 Belgian most famous band AGATHOCLES released 27 pieces of music. Four compilations of old material, but mostly vinyl split 7"es. If you do not know the band, this may sound pretty strange, but for AGATHOCLES it is just the typical output for one year. During the the mid-nineties I have been constantly collecting vinyl and CDs, but at a certain point in life you have to make your priorities clear. One can not listen to all music being played and published, I guess most people have to face the same problems. Seems like already 20 years ago there was an oversupply of music, even in extreme Metal. Of course the amount of good and excellent albums has become more and more over the years (and I think the quantity of releases will not stop rising) and one simply can not follow each band that may deserve attention. So my last encounter with AGATHOCLES was the album "Mincer", released in 2006. The present album was recorded live August 19, 2015 at the Coalition club in Toronto, Canada, presenting 35 songs in barley the same number of minutes. AGATHOCLES are playing live faster like on the studio recordings, even faster if you subtract the short announcements. The sound is proper and despite (or maybe because of?) the short playing time I really enjoyed "Mincing Through The Maples". AGATHOCLES are still playing their very energetic and reduced sort of Grindcore. Despite being downright anti-capitalism the band pulled the same trick like multinational corporations. Establishing and distributing a term or symbol which is strictly connected to the product. The trademark AGATHOCLES invented is the so-called Mincecore. The urban dictionary defines it as "Grindcore with a socio-political purpose", musically it can be described as Grindcore with a dominant bass guitar and focus on songwriting, not just accumulating blast beats. Highly enjoyable for my ears, but I do not think I will try to complete my AGATHOCLES collection. Because at a rough guess I missed more than 300 releases. www.agathocles.com, www.facebook.com/animaterecords