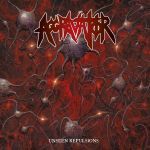 When it comes to new releases or checking out new found(ed) bands one of my favorite pleasures is to take a look at the band photo, respectively the band shirts the musicians are wearing. Back in the old days, before the era of the world wide web, this was always a good information of what bands influences other Metalheads had and therefore maybe worth a listening. Taking a look at the current photo of AGGRAVATOR at Metal Archives we have KREATOR, SODOM and Wrestlemania. Although I did not know the two wrestlers on that shirt, the names KREATOR and SODOM should ring a bell for every fan of the more extreme varieties of Heavy Metal. So it was no surprise that this EP is located within the genre of Thrash Metal. And what I like about “Unseen Repulsions” is the pure Thrash Metal approach. No unfamiliar influences, just genuine and pure Thrash Metal. Another highlight are the aggressive vocals, more some kind of singing and not that kind of husk shouting that, at least to my ears, often ruins Thrash Metal releases. There is a sad story behind AGGRAVATOR, since long standing guitarist Jesse Lopez passed away in 2018. But life goes on and the band already released a self-entitled mini album in the following year, which I like a bit more due to the more old school sound plus some (early) SLAYER like riffing and songwriting. The current EP has a more clear sound and AGGRAVATOR have emancipated themselves from the godfathers of Thrash Metal, so “Unseen Repulsions” is for sure a Thrash Metal highlight. By the way, AGGRAVATOR already released two full-length albums, “Popular Destructor” (2014) and “Sterile Existence” (2016), so if you are bored because of the Covid-19 lockdown, you know what to do. More band info can be found at www.facebook.com/aggravatorthrashmetal, the label is located here: www.facebook.com/empirerecordsbe.