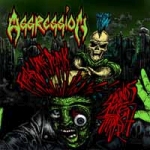 With AGGRESSION from Montreal, Canada, we have another old Thrash Metal legend of the 1980s who made a return after a looooong break. In this case, original guitar player Denis ”Sasquatch” Barthe restarted the band in 2014 with a completely new line-up after a short-lived (and not really productive) comeback with two original members ten years earlier. Since that day, the band released two new albums with “Feels Like Punk, Sounds Like Thrash” being the most recent one. And for a band that old, this album sounds really fresh and reckless, just like the quarter of a century between the break-up and the reunion didn’t happen. The title of the album was chosen for a good reason, since AGGRESSION always had a punkish or better a Hardcore undertone. And it already was like that back in the old days, just listen to their maybe best known song ‘Metal Slaughter’, famous due to being part of the fantastic “Speed Metal Hell II” compilation and the German double vinyl edition of both parts as well. And in 2018, AGGRESSION still play that punkish Thrash Metal, not in the sense of the Crossover style popular in the end of the 1980s, but in the sense of aggressiveness and energy. The only difference is the improved (not sterilized) production and the vocal delivery of Brian Langley, who, in comparison to original singer Éric Langlois, has a more “metallic” voice, but also a greater variability. Just listen to his VOIVOD styled vocal parts in ‘Tales Of Terror’ or the varieties of guttural voices in ‘Torturing The Deceased’ as examples. But these two are not the only ones worth mentioning, since the opener (after an instrumental intro) ‘Attack Of The Ice Lizards’ is a rude Thrasher with Hardcore undertones that describes best what AGGRESSION are all about. With ‘Stench Of You Mediocre Existence’, the Canadians touch the border to Hardcore more than once. And the catchy ‘Once Upon A Time In Hell’ even has the potential to become a mini hit, the Rock’n’Roll part here is damn cool! The very witty ‘A River Of Piss And Vinegar’ finishes an album that is a damn fine example of coming back done right. In case you feel addressed by my words, visit www.facebook.com/aggression85 or www.dissonanceproductions.co.uk