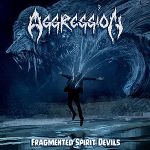 These Canadian bad boys were first formed in 1985 under the moniker ASYLUM, before they quickly changed name to AGGRESSION and delivered the legendary Thrasher "The Full Treatment", which recently has been re-released on Xtreem Music, an album with an intensly mix of Speed Metal, as only Canadians can do it, Thrash and what all young people nowadays call Proto Death Metal. A great album that deserves some attention! Things went as they often did back then, and the band faded and disbanded in 1989, until they suddenly appeared again with a ‘new’ album in 2004 entitled "Forgotten Skeleton" as AGGRESSION A.D. The new album was the intended debut album, scratched back then, remastered and released with some demo material by Great White North Records. Again a solid album, in the vein of "The Full Treatment" strangely enough, though a tad more raw, so one might understand why they did some re-recordings and a few new tunes back in the days. Now the boys are back, mainman and axe-slayer Denis "Sasquatch" Barthe and a bunch of new kids on the block, even though a couple of them have been around for a good time in various Canadian bands, including one of my favorite vocalists from over there, Brian Langley from TYRANT’S BLOOD. The new album follows the old thrashy Speed Metal recipe in a thick Death Metal gravy. Again tons of energy and straight forwardness. AGGRESSION are the masters of controlled chaos, there are always a lot of things going on, without the main riff, rhythm or vocals lose control. The riffing is massive and interlaced with some great leads, the drumming frantic, but still quite on point, the same can be said about the bass, keeping the pounding steady, just below the wall of cascading guitar riffs. The vocals, a rasping thrashy growl, with some wicked screams and disturing clean vocals, which works out very well. The production is also crushing, a bit too much perhaps, a bit more organic levelling would have made the album more massive, as it is mastered very high and all instruments are very much in level, too much of the time. A comeback that is very much granted, when the first album after more or less 30 years of hiatus is as strong as "Fragmented Spirit Devils". And I wonder who listened to who first: Hanneman or Barthe? Or do / did they just pull their basics from the same formula? I was a tad sceptic about this release, though that wasn’t necesary as this album is as relevant as "The Full Treatment" and "Forgotten Skeleton". Now I just hope the great Canadians have more up their sleeve, so they can continue to haunt me. And on a finishing note, who in their right mind, chooses to do a cover of the Scottish heroes of ‘Love Hurts’ NAZARETH? Well for one, Canadian bad boys do, they have covered ‘Razamanaz’, a great Boogiefied Rock’n’Roll tune AGGRESSION-fied. Damn, it actually works quite well, to be honest. More info: www.facebook.com/aggression85, www.xtreemmusic.com