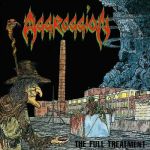 Well, this is a timeless classic, a piece of history in the Canadian extreme Metal scene that reaches 30 years! AGGRESSION is one of those short-lived Canadian acts from their awesome 80s scene. They released just one album in the 80s and disappeared from the map shortly after. I don’t know why but the same thing happened with acts like MESSIAH FORCE, WIKKA (just one EP), DYOXEN, INFERNÄL MÄJESTY, SLAUGHTER, SOLAR EAGLE (just one EP), SACRED BLADE, etc. What we have here is really fast, dirty, raw and aggressive old school Thrash Metal mixed with some early Death Metal and Hardcore elements plus some technical resources from time to time. The album opens with ‘Forsaken Survival’, a fast track charged with some simple guitar riffs and the aggressive Hardcore-ish and distinct vocals of Pierre Fleurant. ‘Frozen Aggressor’ continues in the same way as the previous track. Fast, chaotic and technical guitars from time to time, but the performance in the vocals department is closer to early Death Metal than Hardcore and Thrash. ‘Green Goblin’ opens with some kind of spooky hysterical scream. This is one of the heaviest songs here, faster than the two previous ones. Straight forward and uncompromising intense guitars and crushing drums. ‘One For The Woods’, the fourth track, is pure DARK ANGEL worship from the very first riffs to the vocal style. It sounds like Ron Rinehart on the classic “Leave Scars” (yes, I know, this album was released before the aforementioned US legend). Well, the development of the song offers some really interesting passages with some cool arpeggios on guitars and extraordinary bass lines. ‘Dripping Flesh’ is another good example of thrashing madness here. ‘By The Reaping Hook’, the sixth track, opens with vicious riffs that remind me of another classic Canadian act: SLAUGHTER. This song offers here some awesome brutal proto Death Metal stuff. This classic album close with the 8 minutes long opus titled ‘The Final Massacre’, a track that delivers a slightly different general sound and production, and even in structure and composition. It is not so fast and brutal as the previous stuff. In fact, it is closer to the so-called progressive Thrash, with a lot of variations, and even some clean guitars. Just close to the end we have some fast stuff again. A perfect track that gives you some idea of what was to come on another production that, as you may know, was never released because AGGRESSION disbanded in 1989. If you are into acts like DARK ANGEL, SLAUGHTER, SACRIFICE, RAZOR, DISSECTION (CAN) or SOOTHSAYER, this is for you. One more thing, I’m pretty sure it is possible to find the first press on vinyl (still sealed), that was released by Banzai back in 1987, in some record shops in Toronto (!). Support the band, who coincidentally is celebrating 30 years of their “The Full Treatment” touring across Canada. More info at: www.facebook.com/aggression85, www.xtreemmusic.com