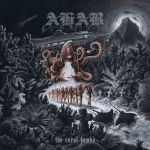 “The Coral Tombs” is not a Funeral Doom Metal record, it is a Death / Doom record with a unique personality. AHAB is one of the pioneers of the Doom genre, I’ve followed them ever since their debut album “The Call Of The Wretched Sea” and they’ve never disappointed, they’ve rather clearly grown as a band. It’s safe to say alongside SKEPTICISM, AHAB stands tall in the ruins of the 21st century Doom Metal scene. “The Coral Tombs” is a concept album based on Jules Verne’s book “Twenty Thousand Leagues Under the Seas”. Sebastian Jerke returns to give AHAB another spectacular cover which simply fits into the mood of the entire album. The opening track also has a lyric video which I’d recommend. Opening with a thunderous riffage summoning age old heaviness, ‘Prof. Arronax’ Descent Into The Vast Oceans’, the first track is a complete glimpse into what the album offers, sludge-hugging rhythms, unforgiving vocals and irrefutable walls of heaviness landing on your chest! Somehow all this is interwoven with the delicateness of guitar notes that gently carry the song into a deep pit where the vocalist Daniel slips into an operatic high of emotions. As these magnificent vocals reach the crescent, we’re treated with a very Floyd’ish guitar solo, frankly, this guitar piece could easily pass off in one of the late ’80s Floyd releases. This is not just an impressive opener, it is a story being told in the purest sense (as I typed that I realized I needed this on vinyl and well, I see a gorgeous blue splatter on the Napalm Records website, okay!) As we move on to track # 2, ‘Colossus Of The Liquid Graves’, the rhythm and the gentle guitar solos stand out, in fact the guitar solos are so comforting that you could simply hear that instrument go on without anything else. Unlike a majority of cases, the vocalist matches the beauty of what the rest of the band creates so it’s really hard for me to pick a favourite part of the album. Everything on this album seems to be put together so carefully, like how these old structures that withstood the test of time and seasonal wars make you think. You begin to wonder what the process was like, I’m incredibly curious about AHAB’s songwriting process. Not that other bands don’t create such scintillating walls of distortion coupled with meaningful words, but AHAB does it to perfection. Track # 3 is a rather special one on this album, ‘Mobilis In Mobili’ is an aggressive Doom track, think the heaviness of NOVEMBERS DOOM but slow that all down by 50%, the drumming and the bass-work on this track is absolutely amazing. It’s consistent, hammering down like the rays of the sun on a winterland yet gentle enough to not turn it into a relic. I’m not going to sit down and review this album song by song although this album in particular warrants it! But, I highly recommend you give this album the hour it demands, this is a brilliant release to kickstart the year with and I already have a potential contender for the end of the year. More info at www.facebook.com/ahabdoom, https://ahab.bigcartel.com or www.facebook.com/napalmrecords