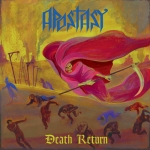 The Chilean underground scene keeps revealing some well hidden bands to me. With APOSTASY from Valparaíso, we have a long running band that is active since 1987 and of course released some stuff during their career. Yet their discography is quite straight forward, due to a long hiatus of 20 years. That’s why 2021 sees only the third full length release from APOSTASY in 30 years, asides from two EPs and a handful of demos. As I haven’t heard any of their stuff before, I can only talk about this new album “Death Return” here. But this album really is a fine topic to talk about. Maybe Black Thrash Metal alone is not the finest argument to give this album a chance, but the fury, the dedication and the energy of APOSTASY surely is! Sharp and precise guitar riffs, combined with variable beats and a fine feeling for good songwriting and effective guitar harmonies, that’s what makes “Death Return” stick out of the mass of records of the genre. The forceful production and the raw vocals of Cris Profaner add up to the qualities of the album for sure. Thus it is no wonder that especially the songs of the (supposed) b-side are among the best I heard in Black Thrash in years. The double ‘The Great Apostasy / The Night’ and the closing, rather doomy and atmospheric ‘Obey The Antichrist’ are my personal listening suggestions. These two are whetting the appetite for more stuff from APOSTASY, something I should check out as soon as possible with their older releases. And of course be excited about more to come, which sadly might not happen too soon, as all members left the band after the recording of “Death Return”, making founding member and main man Cris Profaner the only member of the band right now. Visit www.facebook.com/apostasych for the band and www.facebook.com/fallentemple666 for their label.