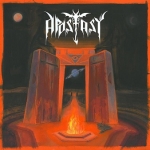 APOSTASY, one of the oldest forces of the menacing Chilean underground resurfaced with their sophomore full length “The Sign Of Darkness”. It is the band’s first release since the 2017 EP “The Blade Of Hell” and their classic debut “Sunset Of The End” in 1991, which is still carrying the sign of the fascinating old times when Thrash Metal was extreme and honest. In collaboration with Fallen Temple Records (POL) "The Sign Of Darkness" is now obtainable in Europe. It was recorded between September 2017 and February 2018, engineered and mixed by Sebastarot and mastered at Lamech Sound Design (Sweden). Mastermind Cris-Profaner took care of most of the songwriting and lyrics like on all previous releases. "The Sign Of Darkness" contains 6 songs and 3 instrumentals in between. This obscure piece of classic Speed / Thrash Metal beholds heaviness, witching atmospheres and a lethal sound that can remind you of a slightly less chaotic PENTAGRAM, maybe also a bit of POSSESSED visiting the territory of DEMOLITION HAMMER and DARK ANGEL. Also, it might sound a bit like any of the South American Black / Death / Thrash bands, where music is always played with uncompromising insanity erupting and spreaded firmly from the heart and soul. Like a blazing strike from a tormentor, this is an unadulterated flow of thrashing with manic energy and a deadly ferocity from the depth unknown. Through the apex and the end you’ll go through a highly energetic chainsaw of Thrash Metal where Death Metal elements were also interspersed without making it obvious as the totally possessed vocals, vicious speed, ripping and flesh shredding guitar tone, stark and menacing atmosphere and recurrent tempo shifting progressions can leave you by yourself in the spell binding darkness. All the songs have a strong sense of individuality and some unique, almost thematic statements that define this release. Especially those that listen to it in one piece and think about the placements of the instrumentals ‘Praise Of Darkness’, ‘The Great Damnation’ and ‘Serpent Spell’, will find out that it magically builds up the engrossing darkness that these maniac Chileans tried to capture. It also fortifies the damnation delivered in ‘Witching Fire’, ‘Armageddon Is Near’ and ‘Strike Of The Tormentor’, which not only proves their magnificent visions and depth of imagination but also embodies their excellent craftsmanship. The lyrics may hint some dark esotericism while the out of this world painting for the cover of "The Sign Of Darkness" envisioned by the Polish Artist Arkadiusz Zając, truly encapsulates the sign of darkness which is incoming through the opening gates when you gaze at the rings of Saturn. APOSTASY returns in 2018 with a release that shows the blossoming of ideas developed during the last decade. A fully redeeming experience awaits anyone who will explore this Chilean Thrash Metal attack, as this is rooted in the genre stylings of the end of the eighties and beginning the nineties. Lack of exposure and promotion may have always kept this band under the radar but hopefully this release will reach the right hands and fell upon the right sets of ears which it absolutely deserve. "The Sign Of Darkness" shall be explored by all the worshippers of PENTAGRAM, DARK ANGEL, POSSESSED and SEPULTURA and would be an enchanting experience for all the possessed souls who always find themselves obsessed by the fanatic sonic madness that erupts from the chasms of South America. Explore more about the band at: www.facebook.com/apostasych and visit their label page: www.facebook.com/fallentemple666