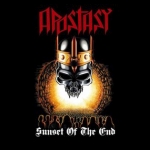 APOSTASY
Sunset Of The End / Fraud In The Name Of God
(Fallen Temple)
76:38min

Have you heard about PENTAGRAM CHILE, ATOMIC AGGRESSOR, TORTURER, SADISM or DEATH YELL before? For sure! But, what do you know about Chile’s APOSTASY? Maybe nothing. APOSTASY must be one of the most underrated 80s Chilean Thrash acts, just as their countrymates MASSAKRE, NECRODEAD, ABHORRENT, WARPATH, BETRAYED, NIMROD, RUST, etc. Due to so many reasons they never got the attention they deserved at the time this stuff was originally released… in 1991! And now it is available once more thanks to Poland’s Fallen Temple (this stuff was launched as a compilation CD some years ago by Chile’s Proselytism). After a great 4 minutes long instrumental intro, this unholy piece of Southamerican old school Thrash Metal kicks off with ‘Fraud In The Name Of God’, a 6 minutes long instant classic that defines APOSTASY’s style in the best possible way: fast, raw, dirty and full of energy, everything filled with a dark atmosphere that you can get just in a country that is ending one of the most brutal, bloody and obnoxious dictatorships! Alberto Leyton’s work on vocals is great: he sounds full of anger and hate. The guitar work is remarkable from the riffing, structure and solos and the drums fit in a good way into this riff assault. ‘Banished From Sanity’ is another great track, pure fast and brutal thrashing madness from start to end! APOSTASY slow down a bit their furious performance with ‘The Sullen’, a short acoustic composition, ‘Deceased In Funeral’, the sixth song, and ‘Malignant Beauty’, another acoustic track. This massacre continues with ‘The Great Apostasy’, another instrumental that works as an intro for ‘At The End Of The New Testament’, an almost 9 minutes Thrash song, the album’s longest. This track has some of the most intense passages in the entire album plus some great tempo changes. Here APOSTASY achieves a great evil intense atmosphere thanks to the addition of an acoustic section and some blast beat here and there. This great album closes with the song ‘The Night’, a perfect last track for a perfect album. This edition contains also the “Fraud In The Name Of God” demo, that was launched originally in 1989. This stuff contains early versions of ‘The Night’, ‘Deceased In Funeral’ and ‘Fraud In The Name Of God’. The music is even brutal and raw here. I’m still asking myself why they didn’t get more attention back in the 80s? Who knows… bad distribution, I guess. Check out the version of ‘Fraud…’ here. It is pure chaotic energy and aggression from the very first moments. They are still active (I remember seeing them live some years ago in my native town along with FORCE OF DARKNESS and INFERNAL SLAUGHTER!). Want to know more about them? Then follow their steps at www.facebook.com/apostasychile. To get yourself a copy contact Fallen Temple at www.facebook.com/fallentemple666