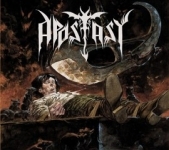 APOSTASY, one of those legendary bands with one obscure full length tape release behind them (from 1991). One of those releases everybody is trying to get hold of for years and years, with nothing but bad dubbed copies flowing around. That has changed now, or well a few years back. The Chilean band roamed the Metal world at the end of the 80s and start of the 90s and then disbanded. They returned in 2013, where they had their album "Sunset Of The End" with the "Fraud In The Name Of God" 1989 demo as a bonus re-released by Proselytism. Since then the band has released a demo, this EP release I am about to review and should soon be ready with a rehearsal demo. The boys are back at it! Fallen Temple has re-issued the re-release from 2013 of the first album and demo, and now this EP as well. APOSTASY is lead by Cris Profaner, who has been with them all the years, and these days he is handling vocals and the bass. And damn, those vocals, all from deep and guttural thrashing madness to higher pitched vocals and on top of the lung screams, I like it! Cris is joined by Cristobal on drums, from one of my favorite new Chilean bands ANCIENT CRYPTS, and Sebastian on guitars, who also roams VARDAGER, a band I have to check out now. Musically it is quite classic thrashing overdrive from Chile, with a good nod towards early American and German Thrash Metal. Not that much out of the ordinary, but damn well delivered. There are some good catchy main riffs, ripping leads, frantic drumming, insane smashing rhythm patterns, insane vocals and great hooks. It is hard not to be carried away when listening to "The Blade Of Hell"! I reckon one of my favorite tracks of the year is ‘Strike Of The Tormentor’, track 3 on this EP, a perfect mix of old and new madness. It takes me back in time, without losing relevance or getting a dusty feel. Very well written and delivered, more of that please! It is great to have these guys back at the steel, now we just need some more thrashing maniacal noise, so I can become a happy puppy! Enter the apocalyptic serenade here: www.facebook.com/apostasychile, www.facebook.com/fallentemple666